An end to a pretty good day

I just can’t catch a break


I wish that we could get to the bottom of Emmett’s inability to fall asleep before it’s time to wake up in the morning. I’m trying to find the humor in this but that proving to be a bit tough because my brain is fried suffering from sleep deprivation.

He actually fell asleep earlier but then woke up and can’t fall back asleep. 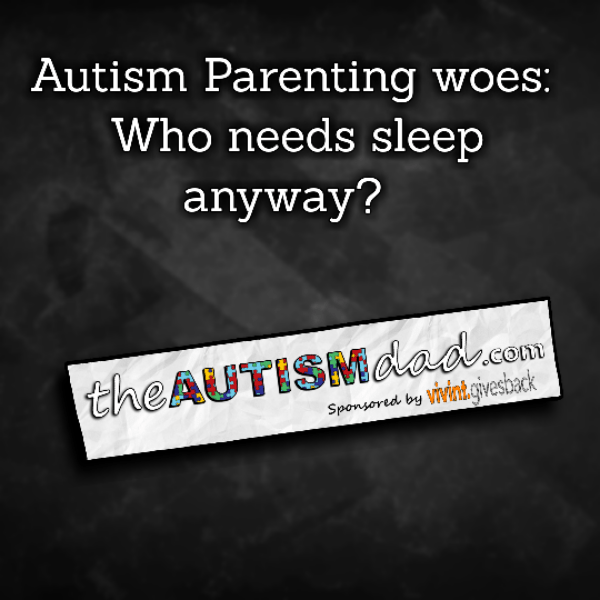 This isn’t meant to be all about me either.  Of course I’m tired. In fact I don’t really have a word that accurately describes how tired I am, so I looked one up. Turns out that I’m Petered out. That’s how tired I am.

Truthfully, my concern is about how this is impacting Emmett.  He’s been so wearisome (yes, I looked that word up also) to work with during the day anymore and I suspect that’s a result of him not sleeping, at least in some part.

I’m at a loss right now.

I think after his last dental procedure on Friday, I’m going to get him into the pediatrician. There are so many potential reasons for his struggling with sleep. Before we dive into some of the more unpleasant ones, it’s best to rule out the obvious ones and just make sure that everything is physically okay..

There are so many things running through my mind as to the cause of this struggle with.  Some are less pleasant than others.

Maybe this is a new symptom of his ever evolving fever disorder. Who the hell knows.  This fever disorder (PFAPA) has taken some weird turns in the last 12 months.

I know he struggles with nightmares sometimes and those have a lasting impact on him.  Like many kids on the Autism Spectrum, Emmett generalizes the shit out of life.

If he’s sleeping in his bed and has a really bad nightmare, he thinks it has to do with his bed and therefore, feels more comfortable sleeping in ours.  There’s no convincing him otherwise, regardless of how unbelievably intelligent he is.

In Emmett’s world, if it happens once, it will happen every time.  That’s generalization and it’s fucking impossible to work through sometimes.

One of the unpleasant thoughts rolling around in my head has to do with his genetics.  Could this be early signs of Bipolar Disorder? Lizze is Bipolar and so is Gavin.  It runs in my extended family and quite a bit on Lizze’s biological side.

Sleep disturbances is one of the big warning flags in kids.  It could also explain his lack of fear and constantly seeming to put himself in danger. That’s how it began with Gavin.

I’m not jumping to anything.  This is one of those moments where you’re sharing in my current internal thought process.  I’m totally petered out and not really thinking clearly at this point.

I don’t think he’s Bipolar. There are way more things that are likely at fault here but I just have that in the back of my mind because we’ve been down this road before.

Anyway, I’m laying in bed, waiting for Emmett to fall asleep.  I’d watch him through the camera but it needs to be replaced and I need to schedule Vivint to come out and do that.

He’s currently in his bed.  Lizze drew some pictured on his back (Emmett’s favorite thing) and I’m laying in my room so I can make sure he stays in bed and at least rests.  I’m hoping he’s fallen asleep because I haven’t heard anything in a little while.

The bottom line here is that I’m worried and rightfully so.  I’m not sure what else we can try.  He’s already on a higher dose of Melatonin but maybe we can add something else to the mix, hence the pediatrician.

I just want to get some sleep and more importantly, I want him to get a good night’s sleep and return to a healthy sleep wake cycle.