Bad news about Gavin and the tough decisions ahead  -

My mood has soured today

We didn’t give up this morning

Bad news about Gavin and the tough decisions ahead


We met with Dr. Pattie tonight, for Tuesday night family therapy. I’m trying to help you out by specifically mentioning Tuesday because if you’re anything like me, after the holiday weekend, you don’t even know what day it is.

The main topic tonight was Gavin.

Even if we had other things to talk about tonight, which we did, it wouldn’t matter because Gavin mission debriefed the shit out of us. 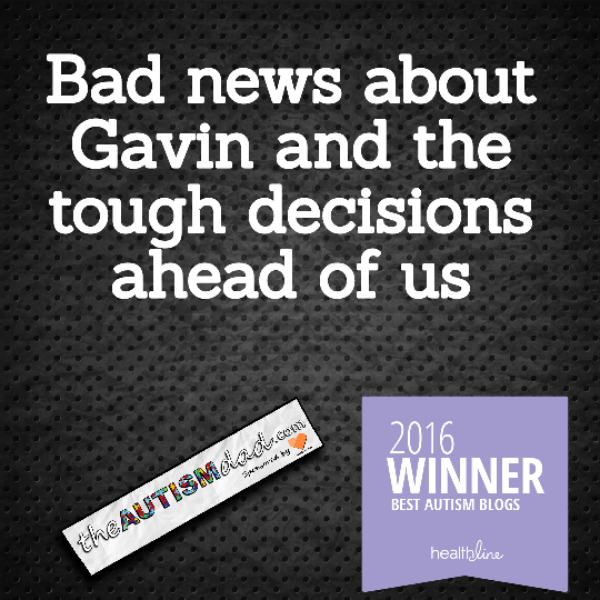 Gavin wanted to catch Dr. Pattie up on all she’s missed over the passed week or so and it took him at least 30 minutes for that download to complete.  It’s been hours now and I don’t think any one of us has been able to process even a tiny bit of what we heard.
Frankly, I don’t even know where to start because he was all over the place.

What he told us tonight ranged from essentially describing himself as a god, all the way to things like having to slice his hand open and use his blood to cure Sunset Shimmer of radiation poisoning from the moon Canon Lunas. It was something along those lines but I’ll be honest, I had a hard time following what he was saying, as did everyone else.

After he finished up and went back to playing, the three of us just sorta stared at each other, trying to figure out what the fuck just happened.

When I mentioned about Gavin essentially describing himself as a god, he didn’t use those words. He claims to see all and know all that goes on in his world.  To me, that sounds godlike.

Anyway, the topic soon became whether or not we felt we had reached a point where his meds need to be adjusted.

Collectively, we all agree that he has crossed that line and something needs to be done to help him find his way back. That being said, this isn’t without serious risk but frankly, allowing this to continue or even progress, carries its own set of risks as well.

Here’s the reality of the situation.

Gavin’s spending less and less time engaging with us and spending more and more time alone, in his room. Saying that he’s experiencing delusions of grandeur, would quite honestly be underselling things by a mile.

The concern is that we have to think about his safety, the safety of everyone around him, his quality of life and the direction in which these hallucinations are heading in.

We have to take that and weigh it against the risks associated with increasing his Clozapine.

Next Monday, we meet with his psychiatrist and I’m reasonably sure he’s going to want to increase the Clozapine. Making this type of decision cannot be taken lightly. There are very serious risks associated with adjusting the Clozapine.

The issues with his bladder control are likely to get worse. This is in regards to his constantly feeling like he has to pee but rarely having to actually go. It really is a bitch to deal with, especially driving anywhere.

This is most likely caused by the Clozapine and is a known but very rare side effect. There’s very little if anything we can do about it.

There’s other concerns like worsening tremors and damage to his white blood cells. Kids have died from this medication and Gavin’s already on a dose so high that we needed to get special permission, just to get the prescription filled.

In fact, if we bump the dose, he will need blood work done on a weekly basis for at least the next six months to a year. That’s what the nurse said a few weeks ago when we were contemplating adjusting his dose.

Gavin’s happy. While it’s exhausting for him, he really enjoys the adventures he goes on with his super best friends. Making them dissappear could really serve to upset him and that in and of itself could make things worse.

For now, we have a few more days to really think about what direction we need to go in.

Making decisions like this really sucks because there’s no way to know what will happen or won’t happen, with any degree of certainty. All we can do is weigh the options, be as objective as possible and trust the advice/guidance our highly trained specialists have to offer.

Truthfully, I’m so completely overwhelmed right now and I know what my gut tells me to do but that’s in conflict with what the rest of me is saying.

I wouldn’t wish this on anyone.