I'm super proud of myself because of the dumbest thing -

How literal interpretation leads to meltdowns


For the last couple of weeks, all the unwanted attention I receive from chronic sleep deprivation has rendered be useless during the day while the boys are at school.

After getting the boys to school, I would come home and basically crash for at least a few hours because I was so exhausted.

It’s really frustrating for me because I want to sleep and night and not during the day. As an Autism Dad, I have a take what I can when I can, beggars can’t be choosers kind of approach to sleep.

The reason I’m proud of myself today is because so far,  I’ve made it without a nap. That hasn’t happened in a long time and the crazy thing is I’m feeling pretty damn good right now.

Gavin and I took Lizze to her appointment this morning and then took care of a small but much needed project at home.  I’ll talk about that later but it makes a big difference.

I totally get that some people won’t understand why this is all such a big deal to me but it’s a step in the right direction. Autism and Special Needs Parents more often than not, have to live their lives on little or no sleep for long periods of time.

Being blessed with a day that I’m not feeling like death warmed over is rare but always a good thing. 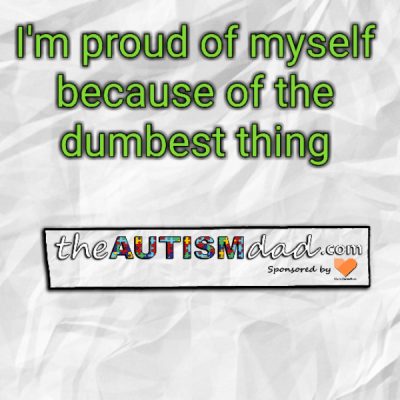