We faced several challenges this morning  -


I was able to nab a whopping four hours of sleep last night. Surprisingly though, I don’t feel too bad today.

We started off the morning convincing Elliott that he had to go to school, even in he didn’t like his hair. He actually took more work this morning than Emmett did in regards to putting his shoes and socks on.

When we arrived at the school, I walked the boys in because I promised Elliott I would let the school know he was upset about his hair.

We ended up speaking with the principal about it and he said that he really liked Elliott’s haircut but that he would let the teachers know that he’s stressed out over it.

When I left the boys and headed home, Elliott was exposing his hair for the whole world to see. Everyone really liked it because it really does look good.

He’s coming around to the new look and I bet he’ll end up doing just fine. As soon as he’s comfortable getting a picture taken, I’ll share it..  ☺ 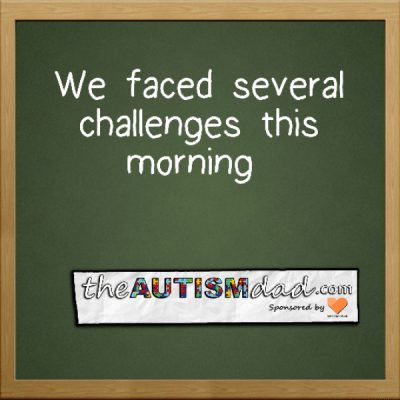