How literal interpretation leads to meltdowns  -

How literal interpretation leads to meltdowns


I promised that I would write about why Emmett’s school report led to so many meltdowns over the last week or so. The reason can be summed up in two words, literal interpretation.

The instructions provided simply said to write about three things you like to do in the snow. Seems pretty simple and straight forward, right? Wrong..
Emmett was so fucking stressed out over this because he takes the instructions quite literally, and is unwilling to deviate from them in any way for fear of breaking the rules or lying. 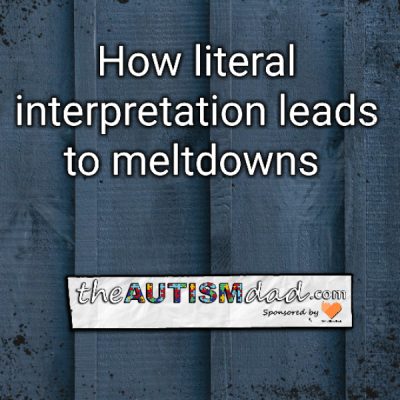 When we sat down to work on this last week, we began by coming up with three things he liked to do in the snow. That proved to be so much more difficult than it sounds.
The way Emmett’s brain works, he interpreted the instructions to mean that he could only write about things he enjoys doing, while physically standing in the snow.

I should mention that in our neighborhood, it’s not always safe to play outside, even during the winter. It should also be said that Emmett freaks out if snow comes into contact with his skin. His hands are okay but nowhere else. Things like snow angels are out the the question.