The weird things my son with #Autism says -

The weird things my son with #Autism says


The things I talk about in this post are not meant to be disrespectful for Gavin. If you’re an Autism parent, you’ll probably have at least some experience with your kid saying something weird in front of someone in public. They don’t mean anything by it. It’s just those pesky, awkward social and conversational skills.

We’ve all been there and it’s okay to talk about these moments because if we don’t have a sense of humor, we’ll go crazy at a much faster pace.

It’s a sign of a good day when I’ve made it this far without collapsing from exhaustion. 😁

The boys got off to school without too much headache and we really do appreciate the effort they put in to make that happen. Not having to deal with massive meltdowns first thing in the morning is a great way to start things off.

I was supposed to do a phone conference about 10:00 am but something come up and I had to reschedule. 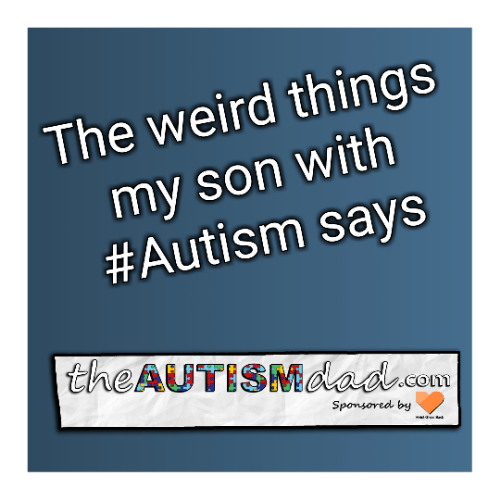 Dish was out today as well, to work on the satellite and the guy that came out was really cool. While he was here, Gavin was on the couch receiving his IVIG infusion.
I’ve said this before and today was no exception. Gavin’s in a really weird place. He’s making all kinds of bizarre comments that create an incredibly awkward situation for those around him.

The Dish guy was upgrading our box and going over all the new features. Gavin decided to open his mouth and shout something along the lines of holy rings of Sonic, they pay you too much.. He (Gavin) thought it was hilarious but it was kinda really weird and the Dish guy didn’t know how to react. Frankly, for that matter, neither did I.

Lizze and I are noticing this more often since his Lithium was cut in half. This is just normal Autism related awkwardness and while this made things uncomfortable, I wasn’t mad. I did correct him after the guy left though.

His other favorite thing to do lately, is trying finish our sentences. That bugs the shit out of me and no matter how many times we’ve corrected him, it’s no help. Oh..and he cannot complete our sentences with any accuracy. 😁

I absolutely needed my one hour break today, before picking up the boys from school. I’m really tired but haven’t stopped for a nap and dammit, I’m proud of that. ☺