Generalization is a b!tch -

I’ll give you one guess

Generalization is a b!tch


One of the most frustrating things for me as an Autism Dad, in regards to my kids with Autism is generalization.

Merriam-Webster defines generalization as the act or process whereby a learned response is made to a stimulus similar to but not identical with the conditioned stimulus.

In layman’s terms it means that if something happens once, it always happen again. Kids with Autism tend to apply this concept to just about everything in their lives. My kids are no exception. In fact, my kids are the poster children for generalization.

Let me give you a few examples from recent history, most of which center around Emmett.

I’m really tired and these are the best examples my sleep deprived brain can come up with at the moment. Hopefully, you understand what I’m trying to say.

The point I’m trying to make is that when you have a child with Autism, you have to be extremely careful what you say or do around them. Not only that, but you have to worry about what the people around them say and do, because it doesn’t matter where it comes from, kids will generalize many experiences, both good and bad.

If you have a child with Autism in your life, keep these things in mind because generalization can be a bitch for Autism parents to deal with. It only takes one time to set a trend that causes chaos.

It’s not easy and I’ve stepped on many a landmine in my tenure as an Autism parent. All anyone can do is their best. It’s probably a good idea to live by the rule, if you are unsure, ask….. ☺

How many of you can relate to these issues with generalization? What’s your experience and how do you deal with it? 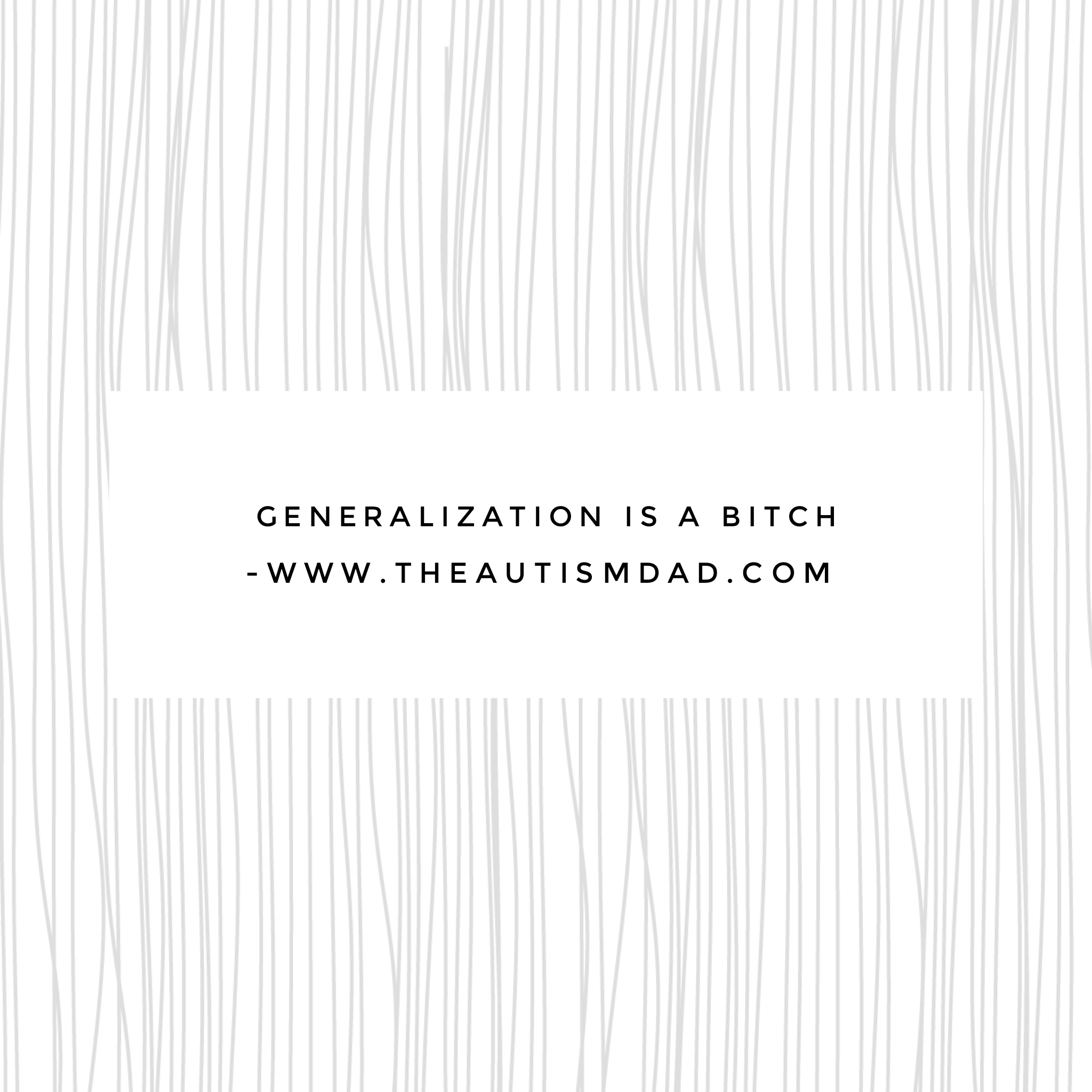 OK. In and of itself, “generalization” is a neutral term. However, most commonly in the autism context “generalization” is used in reference to the process of applying taught skills (social or otherwise) to other settings or situations. If the skills are intentionally taught, then presumably one wants to see those skills applied in different situations.

I’m not saying Rob used the word incorrectly. However, In most usages in the autistic context, it more often than not refers to something positive. That’s why I was curious when I saw the title of this post. Not that I was I was generalizing wth respect to the term generalization or anything like that…

Since this is a blog that focuses on autism, I was just highlighting a term, which, when used with regard to behaviors associated with autism, is more commonly used in a different context than how Rob was using it. And FWIW a google search of the terms “autism” and “generalization” does illustrate the more common usage.

All of that said, I am in no way minimizing anything that Rob is experiencing. In fact, I totally get it.

Now see, I think Rob used the word correctly. As far as I can tell from a quick Google search, it is a neutral term. And I’ve always used it so.

I’m pretty certain a quick google search would show that typically generalization is characterized how I’ve described above. Just wanted to point it out because the more common usage, particularly in the context of autistics, would be as a positive and something to strive for, not as a negative.

But whatever. I understand what you’re talking about and I’m sure you understand what I’m trying to say. It’s all good. I appreciate your willingness to discuss all this and putting this all out there. Promoting discussion of these issues, as long as we can debate them civilly, is a good thing…

Yes but it’s only in one main area and that’s social skills. That’s sorta like saying botulism is a positive thing because people use it for Botox. If we look, there are almost always two sides to something like generalization and in my personal experience and the experience of many other parents I’ve spoken with though this blog, it’s overwhelmingly negative.

The way I look at things like this is that yes, you’re right about there being positive in regards to generalization. I totally agree. However, the negative side to generalization is pretty awful for many families and very difficult to counter. In that respect, the good doesn’t outweigh the bad for many of us.

Personally, I’ve never seen generalization in a positive light but your point is well taken… 🙂

Very frustrating stuff, although typically one wouldn’t use the term “generalization” in a negative light. Typically it refers to something positive, as in the ability to apply a specifically taught skill to other situations or other contexts. In other words, generalization is generally something you WANT your kids to be able to do. For example, when your kid learns to have a conversation without interrupting and can do it well in a social skills group, you want your kid to be able to generalize and apply those conversation skills in other settings outside out the social skills group. Unfortunately it’s not always easy, and that’s why it is typically stated that autistic individuals have difficulty generalizing.

I realize that you did mention that kids can generalize both good and bad things, but this is just something to look out for when using that term, as typically people will talk about generalization as something they’re striving to achieve for their kids/students etc., and in particular autistic individuals.

But I do sympathize with what you’re talking about. No amount of explanation or rationalization helps in those situations, which makes it all the more frustrating. If and when they do eat something that they are reluctant to try, always remember to make a big deal about it, acknowledge the achievement, and praise them.

Sometimes I feel like we live in different worlds. Lol Generalization has always had a negative connotation because it’s most often applys to responding to a situation based on a previous situation, regardless of circumstances..