Childhood Disintegrative Disorder is stealing our son from us -

A significant increase in security at my kids school today

Childhood Disintegrative Disorder is stealing our son from us


This post was started on Friday and has taken me this long to finish. It’s been a long weekend and I apologize for my absence.

I was largely absent here today because I’m struggling a bit right now. I’m having a hard time coping with certain things at the moment, Gavin being one of those things. I’ll be the first to admit how terrible that sounds. I can assure you, it feels worse for me to say that.

Gavin is driving me crazy and it’s taking a toll.

As time moves forward and his overall condition worsens, it becomes harder and harder for him to think. He has a much more difficult time trying to think his way through even the most one dimensional situations. These are things like figuring out how to move something when his hands are already full or even unlocking the front door.

He’s trying so hard and it breaks my heart to see him struggle like this. 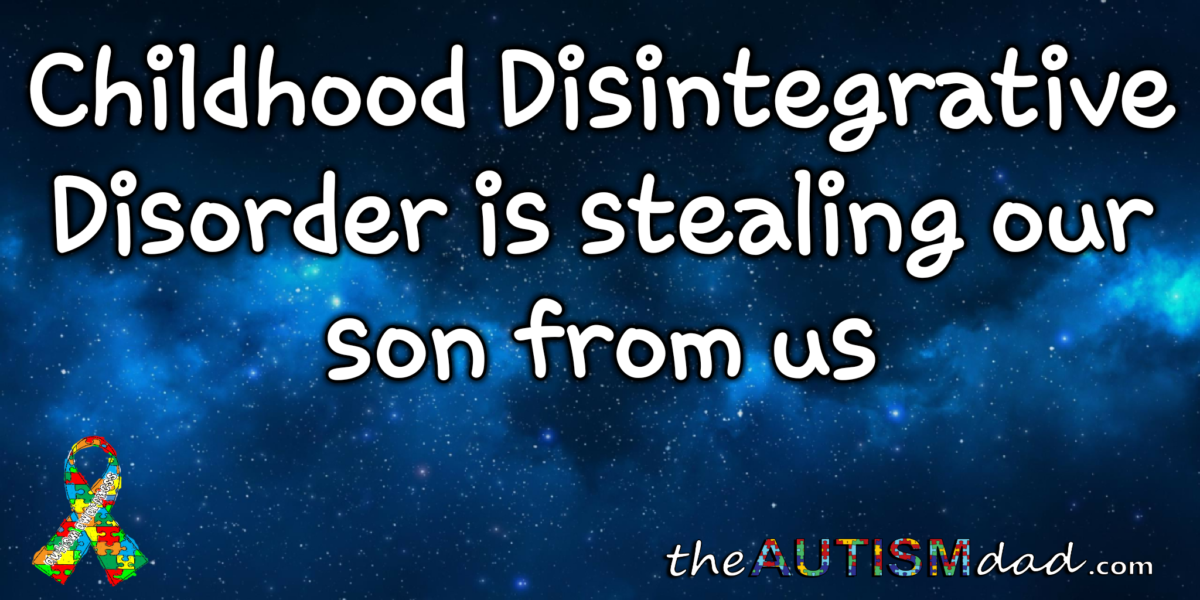 Childhood Disintegrative Disorder is a fucking devastating condition. I wrote a post about it when Gavin was officially diagnosed back in 2015, while Lizze and I were separated. You can read it by clicking here.

If you don’t want to read the previous post, I’ll sum it up for you. Childhood Disintegrative Disorder is a condition in which a child develops typically until about the age of four. From that point forward, they experience a slow but steady regression. There is never a positive prognosis and because almost nothing is known about this incredibly rare form of Autism, knowing what to expect or prepare for is elusive.

Even though it’s incredibly rare, we do know that Gavin’s case is a-typical. Most documented cases show that the child will regress to a point and then sorta plateau. In Gavin’s case, he never stopped regressing.

We don’t know how far he will regress, but it’s pretty clear that there’s no end in sight.

I hate how frustrated I get with his behaviors. I know I’m human but I wish I was stronger. I wish I could sit and listen to him endlessly talk to me about things he’s already talked to me about. I wish I had the patience to constantly walk him through all the things he can no longer remember how to do on his own, without getting frustrated.

Most of all however, I wish I could stop this from happening to him. I wish I could make it so he could grow up, have a family and live the kind of life any parent would want for their kids.

Unfortunately, we know enough to know that this will not end well for Gavin but not enough to know much more than that. Conditions like this have very little in the way of research funding because so few people have it.

As his father, all I can do is walk this path with him, helping where needed and carrying him when necessary.

There are times when I’m able to sorta forget about all of this because things might be going well. Unfortunately, that never lasts for long because reality is nipping at our heels, gearing up to smack me right in the face.

It sounds like it has been very hard for you to deal with the situation. But let me be very honest with you. I don’t know for sure, but I imagine it is just as hard for Gavin, since he finds it extremely difficult to express what he wants or needs, as well as to express his love for you and other family members. I am sure you are doing the best you can with him, and that is all I can ask.

Again, Gavin is a unique case. He lacks a great deal of self awareness, which is a huge problem in everyday life. However, it also makes him blissfully ignorant as to what’s going on with himself. He simply doesn’t know that there’s anything wrong. It’s not easy for Gavin but whereas you know and understand that you’re on the Spectrum, Gavin doesn’t. Again, under different circumstances, your agreement would be right. It applies to our other two kids but not to Gavin. Thank you for your kind words and for sharing your thoughts. ☺

Actually, I didn’t know I was on the Autism Spectrum until I was 12 1/2 or so, when my mom and I read a book about it. This was when she told me that I was on the spectrum. I did realize that there was something different about me well before then, such as having an aide with me at school when the other students didn’t. I was first diagnosed with a pragmatic language thing when I was about 2 1/2 (so probably around December 1995/January 1996), but that was later changed to PDD-NOS (Pervasive Developmental Disorder-Not Otherwise Specified, this has also been removed from the DSM). I was 15, almost 16 when I was re-evaluated, and was rediagnosed with Asperger’s. Again, I am very sorry if you felt like I was attacking you or Gavin (or anyone else, for that matter), or sounded rude. That most certainly was not my intention.

That’s really interesting and will probably help others out there because you were willing to share your experience. You’re perfectly fine and haven’t said or did anything wrong. I really appreciate your input. This is just really hard to explain and even harder to understand. ☺