Gavin has been officially diagnosed with Childhood Disintegrative Disorder #CDD

Gavin has been officially diagnosed with Childhood Disintegrative Disorder #CDD


It’s been a really long day and I haven’t felt like writing tonight because I’m trying to process everything.

I was going to do a Periscope broadcast and I probably will tomorrow at some point because sometimes it’s easier to simply speak.

I’m going to try to write this but my brain is sorta on overload at the moment,  so please understand that I’ll write something more coherent later.

Anyway,  I didn’t want to talk much about this until I had spoken to my family first.

I spoke to Lizze and most of my family.  I’ll try to talk to Lizze’s Mom again at some point to explain what’s going on as well.

I just didn’t want people reading about this before I could tell them myself. 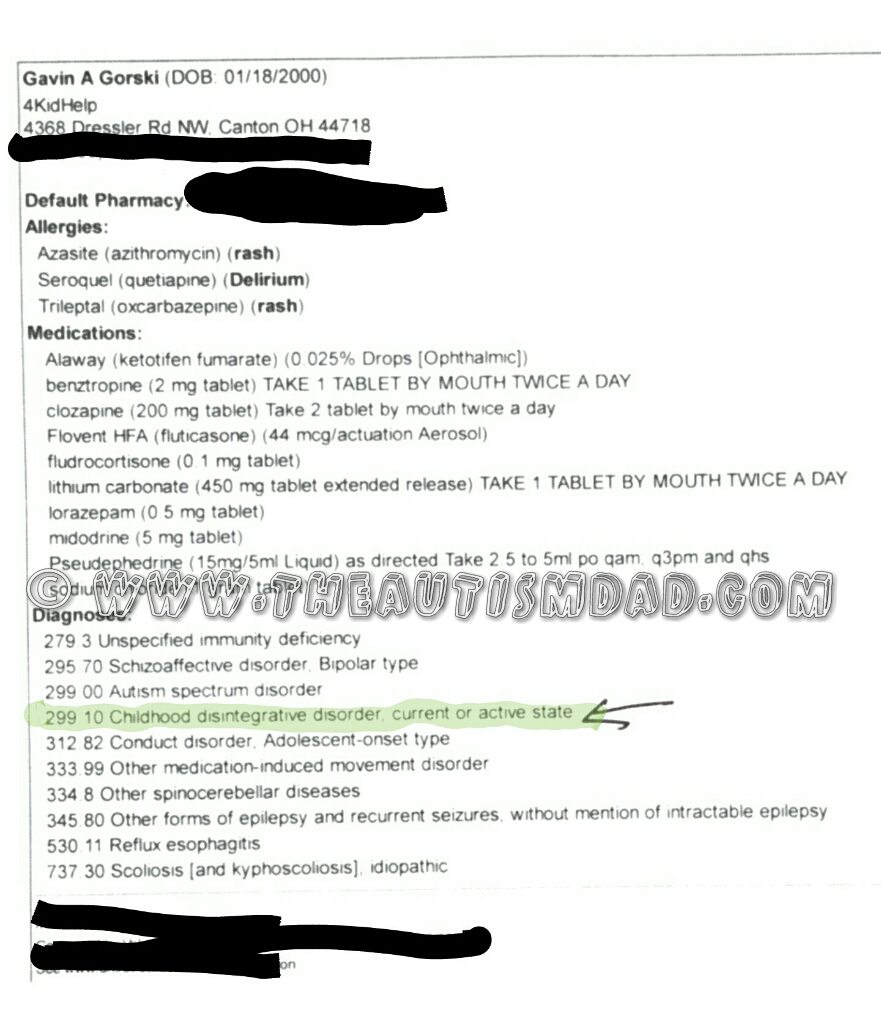 The image above shows his current and complete list of diagnoses.

299.10 is the diagnostic number for Childhood Disintegrative Disorder and they are now forever burned into my mind.

This diagnosis wasn’t altogether unexpected because it’s been suspected since he first began regressing when he was about 3 or 4 years old.

It’s one of those things that no one wants to diagnose because of what it means.

Every child is different and Gavin never really presents typically with anything but he regressed into Autism when he was 3 or 4 years old.  I always say it was like we put him to bed Gavin and he woke up someone else.

This has nothing to do with vaccines,  so please don’t even go there… ☺

CDD is a form of Autism in which a child develops normally until about the age of 3 or 4 and then experiences a profound loss of motor function, speech,  cognitive ability and social skills.

The literature states that by the age of 10, those dealing with CDD will regress to be very low functioning Autism and can even become nonverbal after developing language.

He will plateau for awhile but then continue to regress eventually once again.  It’s just always been this way and it’s well documented by all of his specialists.

There really isn’t that much known about CDD because it’s so rare but Gavin seems to be breaking the mold a bit because he continues to regress into his mid-teens.

Behaviorally,  he’s still doing very, very well but he’s struggling in every aspect of his life,  from memory function, cognitive ability and problem-solving to coordination and speech.

No one knows how far he will regress.

Based on his history with regression,  he may never really stop regressing.

What that means for him or me,  I’m not sure at this point.  There is job treatment or cure for CDD and the prognosis is very poor.

All that can really be done is to keep him moving,  treat the symptoms and make him comfortable.

That’s about all I can muster for tonight.  I’ll try and answer any questions tomorrow, so please leave them in the comments below.

Can’t help but pray some more help will be found for him. Courage, comfort, and strength to you & yours. Hope you can rest.

Hi Rob I am so sorry to hear this. I believe my cousin is going through the same thing. When he was 8 years old, I went away on holiday for 3 weeks. When I came back, my cousin was a completely different person. No speech, he was not sleeping, he washallucinating, no eye contact, no social skills, it was horrific. A year later, we are still no closer to a diagnosis. Doctors in England keep suggesting General Autism, but do not seem to believe that he was a completely, normally functioning child before these sudden few weeks. Now he wets himself, sits in a daze and is barely responsive. Its devastating.

I’m so sorry to hear your story. It sounds like ours. My son is now 10 and we have not been able to get any answers. My son has continued regressing since 3 and lost all language about 2 years ago. It’s been rough. I hope your son is well and sending hugs.

Now, I have never met you or any of your family members (as far as I know). But Gavin is still Gavin, it’s just that many things are harder for him now than they used to be. I have an idea what you might be thinking. “You wouldn’t be saying that if you had to care for a child who has what he has.”

I have Asperger Syndrome (milder end of Autism Spectrum, has also been removed from the DSM), and I feel like saying “we put him to bed Gavin and he woke up someone else,” is like if one of my parents said something like, “she was Leanne before her brother was born, and then she became someone else.” I am still the same person I would be if I didn’t have any special needs. Certain things are just harder for me than they are for most people. I am very cheerful, caring, considerate, energetic, and know what I want/need. I do not like to be thought of as an Aspie, Autistic, disabled, special needs. I would like to be thought of as a person who happens to be on the Autism Spectrum.

Leanne, thank you for your thoughtfully put comment. Unfortunately, Gavin’s situation is very different. When a child experiences what Gavin has experienced, it is very much like we put him to bed Gavin and he woke up someone else. That’s not an insult. He had a massive personality change. Things he liked and didn’t like changed. It’s important to understand that he wasn’t born this way. A some point, for some unknown reason, a switched was flipped and everything we knew about him changed. There’s no other way to describe. Please don’t conflate this with a more typical Autism related situation because they aren’t even close. I totally get what your saying but the change is so sudden and so profound, that most parents who experience this describe it the very same way.

I hope that makes sense and that I came across the way I meant to.. Have a great weekend and thank you for sharing your thoughts.. ☺

Thank you, Rob. I was not trying to conflate what he has with what I have, and I do understand that he may not have been like this when he was younger. No hard feelings whatsoever. I wonder how my parents felt when I was first diagnosed.

No worries. All three of mine have Autism and I only see them as my kids. Gavin was just a different situation. We didn’t love him any less but as a parent, it was beyond painful. The child we had known for 4 years was gone and we had to get to know the one in front of us.

I did not mean to hurt or be rude to anyone. I just wanted to share my thoughts. I am known for being blunt with people, so I’d guess that can be mistaken for being nasty. However, that was not my intention when I posted the original comment about Gavin still being the same person he was before.

You’re totally fine. There was no offense taken. I just wanted to help you better understand where I was coming from in regards to Gavin. It wasn’t like he received a diagnose for something and that changed the way we saw him. He went through a profound change, to the point were he was a completely different person. His likes and dislikes changed, he no longer gave hugs or did the things he used to do. The best way to explain it is to compare it to someone with Alzheimer’s. When it hits, it can be so profound that the person you knew no longer exists. Thats sorta what it was like with Gavin.

Childhood Disintegrative Disorder is extremely rare and absolutely devastating. Every family I’ve managed to come across describes it the same way. That’s actually part of the criteria for diagnosis.

That is how I understand it. The person seems to be developing just fine until some time between ages 2 and 10 (but usually around ages 3 to 4), but then begins to lose skills he or she has learned. This loss is often extreme.

I’m so sorry.  You must be broken-hearted.  What a difficult, difficult thing to face.  He’s lucky to have you on his side.

Thanks dot. It’s one of those things where nothing really changes but at the same time, everything is different.
Does that make sense?

I want to say I’m sorry. I’m hoping that getting an accurate diagnosis will help.

Thanks dot. It’s one of those things where nothing really changes but at the same time, everything is different.
Does that make sense?

I’m so sorry.  You must be broken-hearted.  What a difficult, difficult thing to face.  He’s lucky to have you on his side.

I want to say I’m sorry. I’m hoping that getting an accurate diagnosis will help.