A down and dirty update


I was waiting for the boys to be dismissed from school, as I do every day. About thirty minutes before dismissal, Emmett’s teacher came out to let me know that one of his fellow classmates had stabbed him in the hand with a sharpened pencil.

His teacher explained that this classmate was having a rough day and a difficult time controlling himself. I can can honestly understand that because I live with three kids that can have the same problems.

This kid stabbed Emmett in the hand, shoulder, wrist, and leg with a sharpened pencil. His hand was the worst as the skin was broken and it bled. There is a pencil scratch on his wrist, as well as marks on his shoulder and leg.

Emmett is okay but doesn’t understand why this kid would do something like this, especially because they’re friends. 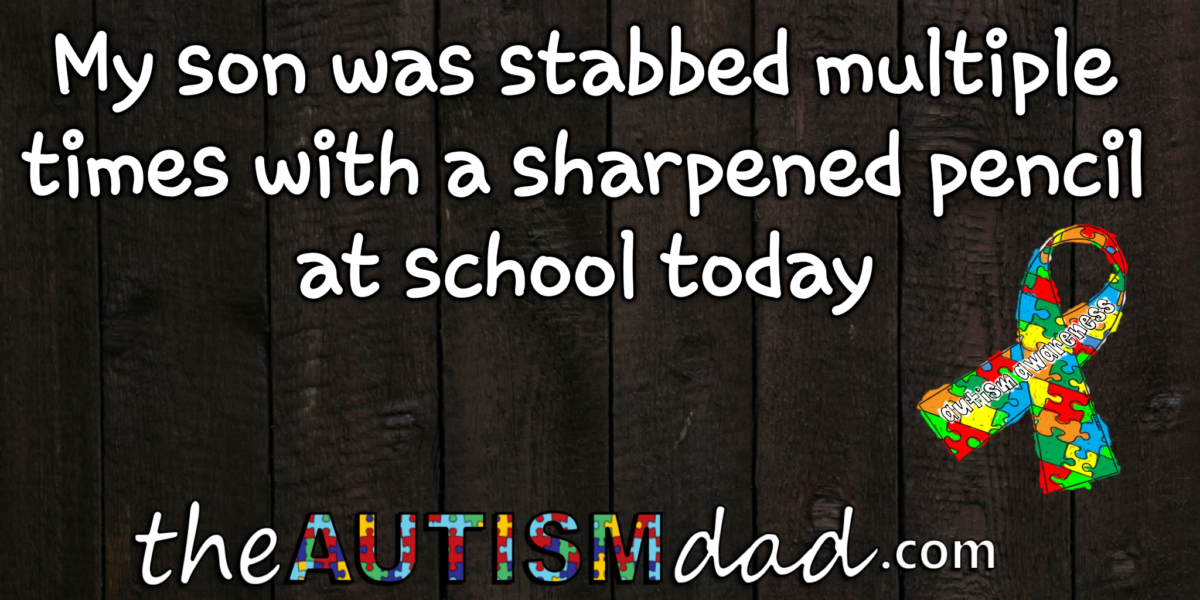 I could have flipped out and made all sorts of noise but that wouldn’t do any good. The teachers handled it and Emmett’s okay. I’m not happy about it and I want this student held accountable for this. I was comforted to hear that this kid was suspended for two days.

I know who this kid is and he’s not a bad kid. In fact, as I said, he and Emmett are friends.

You have to remember, this is a school for kids with special needs and sometimes those special needs involve impulse control issues. At the same time, this behavior is inexcusable and he needs to be held accountable for his actions. The school is doing just that.

While I’m glad this has been handled, I need some assurance that this won’t be allowed to happen again. I plan on speaking with the principal in the morning and discussing how to ensure just that.

I know this wasn’t done in malice but at the end of the day, intentions don’t mean shit because my son was hurt. It could have been worse but frankly, his hand was bleeding and that makes it bad enough.

I don’t think I could be calm over this. I understand the other kid has issues but 2 days suspension? How does anyone know the kid won’t have more issues? Or stab harder next time?

I totally agree and that’s why I met with the principal. I’m working in an update to explain everything… ☺