A down and dirty update

Choosing A Babysitter: How To Make Smart Choices

While I was waiting to pick the kids up from school today, I made it a point to sit down with the principal and express my concerns in regards to Emmett being stabbed multiple times with a sharpened pencil yesterday.

I know the kid responsible for this assault, for lack of a better word. He’s not a bad kid and this is very much out of character for him.

This is a school for kids with various special needs like Autism, ADHD and others. As an experienced Special Needs Parent, I know that there is probably more going in beneath the surface here, especially considering how out of character this behavior was for this kid.

I don’t believe this was maliciously done. It sounds like this kid was goofing around and made a bad choice. I don’t think he intended to hurt Emmett and I’m taking that into account when I move to address this with the school. 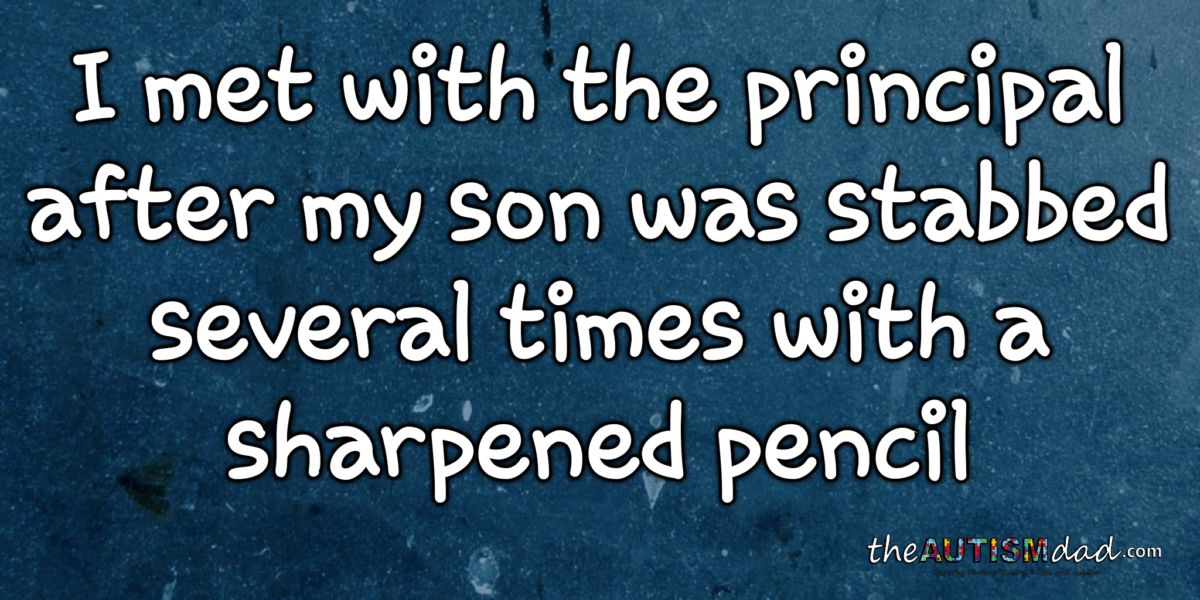 While my kids have never been violent as a result of being on or off of a medication, everyone is different. I don’t know if something like this was involved in what happened yesterday but it seems like a reasonable theory.

I should correct my above statement to reflect that Gavin used to be extremely violent but it wasn’t medication related. Gavin’s been known to throw chairs, pencils and even flip desks when he was in grade school. The point is that even when we do everything right as parents, things can happen and people can get hurt.

Again, whether or not medication was involved in this incident with Emmett isn’t something that I’m privy to, due to privacy laws and I respect that. At the same time, it also doesn’t matter because Emmett was assaulted with what amounts to a weapon and suffered injuries as a result.

My reason for addressing this with the principal is to raise my concerns and make sure I understand how this is being dealt with.

My main concern was that if medication was involved, either because of being on or off a particular medication, a suspension isn’t going to solve the problem going forward. If medication was part of the problem that led to an otherwise well behaved kid, stabbing Emmett several times with a sharpened pencil, that needs to be addressed before he is allowed to return to school.

I don’t think this is an unreasonable expectation to have. I know this was out of character for this kid. That’s not just the school saying that either. He’s one of Emmett’s friends and I’m keeping that in mind as well.

Like I said, this is a school for special needs kids, and it stands to reason that medication may have played a role in this incident. I’m simply wanting to cover my bases by making sure that if medication did indeed play a role, that whatever problem it caused, gets resolved prior to sticking him back into a classroom with Emmett or any other kids for that matter.

I would expect no less of Lizze and I, if we found ourselves in a similar situation.

While the school won’t divulge this kind of information, they have assured me that they are covering this from all angles.

Emmett has forgiven this kid and I’m going to follow his lead on this. At the same time, I will also ensure that something like this doesn’t happen again.

Please don’t think I’m not upset about what happened to Emmett because I’m pissed the fuck off. No one hurts my kids and gets away with it. I’m extremely protective and can even be prone to overreacting at times. Having said that, sometimes there’s more to the situation than meets the eye and my gut tells me this is one such situation.

As far as I’m concerned, as long as whatever contributed to this event has been corrected, we move forward.

So far it’s an aberration. If it happened again then that’s the time to be super-proactive. Good luck!

I totally agree. Happening again to either Emmett or anyone else would require immediate and permanent removal from the school.

I figured. Hope things do much better for him.