Even Daddies make mistakes and need to apologize -

Emmett and I met with the principal this week

Today was one of those days where I feel like a parenting failure. There wasn’t one specific thing that contributed to me feeling like this but rather a culmination of things.

The boys were being the boys. They were loud, hyper and testing my patience.

Gavin was being Gavin and that means he was talking non-stop about his games or the games he’s saving up for. He’s become much more sensitive lately and he reacts to stress in a not so positive way. That is very frustrating for me.

I just didn’t have the patience that I should have had today. I was short with the kids on several occasions and I let their behavioral challenges get to me.

No ones perfect, least of all me. 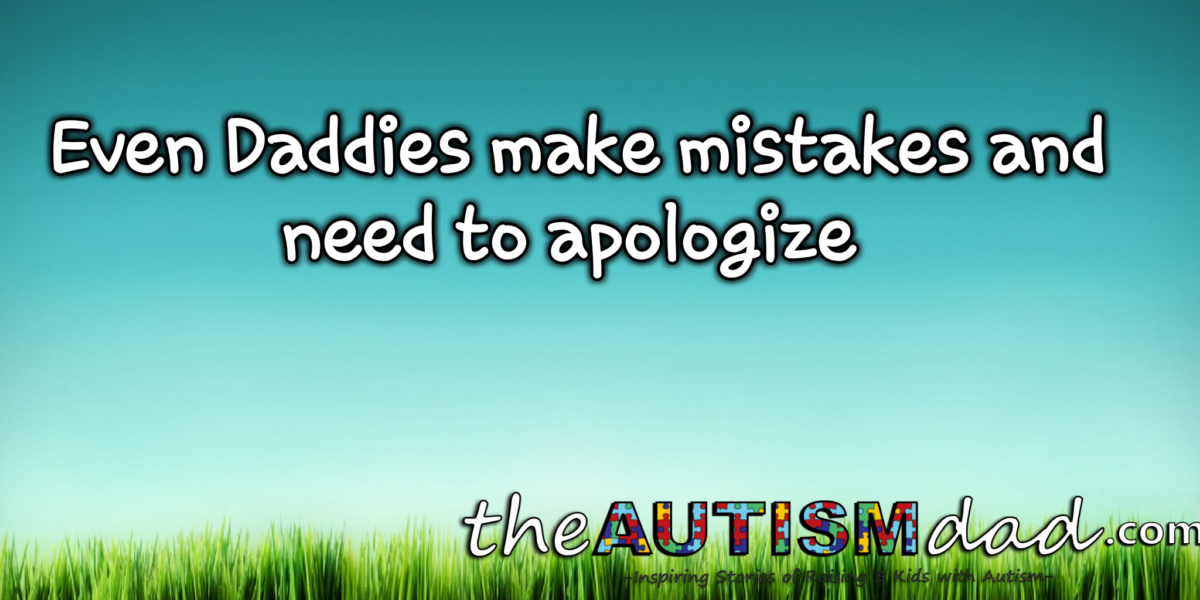 I’ve had a difficult week and frankly, it’s taken a toll. I haven’t felt well for most of the week. I don’t know if it’s the same thing my Mom has been fighting off for almost a week now. I’ve been nauseated, super grumpy and not eating much.

The other thing it could be is that this is the first time I’ve been completely off of Paxil. I suspect that’s playing a larger part in all of this than I probably realize. I’ve been using the Fisher Wallace Stimulator and it’s definitely making this easier but my body is still adjusting to no longer having the medication in my system. I was taking a medium/high dose of Paxil for close to six years and maybe the withdrawal is hitting me again.

Regardless, it’s not an excuse.

At the same time, I’m trying to remember that being human has its limitations. I feel like a hypocrite for beating myself up because I always tell my Autism parents that it’s okay to have bad days. Being perfect is an impossibility and the best we can do is the best we can do. I’ve been telling people for almost a decade that’s it’s okay to feel the way we feel because we are human beings trying to do a job that requires superhuman abilities. There will be times when we yell or even say things we later regret.

It just goes to show that I still struggle with these same things at times.

I hate yelling at my kids. I hate even raising my voice to them for that matter. I was guilty of that today for sure. Lizze had to pull me aside a couple of times because I was so overwhelmed and not handling it well. As much as I hate having to be put in my place, it’s a comfort to know that we have that kind of checks and balances. I have to do the same for her at times and that’s what makes us a good team.

At the end of the day, I tucked the kids in and apologized for not being my usual patient self. I explained that while they weren’t always listening today, I shouldn’t have yelled. I want them to understand that even Daddy makes mistakes and need to apologize. No one’s perfect and but it’s important to admit when we’ve been wrong. I was wrong today, at least a few times but I reminded the boys how much I love them and that we all have bad days. All we can do is learn from our mistakes and keep moving forward.

It’s also important that I forgive myself for not being perfect because if I don’t, the guilt will build and fester. That’s not good for anyone.

Tomorrow is a new day and a clean slate. I plan to take full advantage of it.