MASSIVE UPDATE: Heartbreak and a few other things -

Show of hands, who can relate to this #Autism Parenting challenge?

MASSIVE UPDATE: Heartbreak and a few other things


As we close out another stressful day in world of special needs parenting, I thought I would touch base on how the day went.

We know that Emmett didn’t make it to school. Rather, he made it to school but not out of the car. It was one of those sensory days where he was so hypersensitive, there was no working through it.

That’s not to say we didn’t try and try extensively because we did.

Every once in awhile, we hit days like this where Emmett just cannot tolerate anything on his feet. It doesn’t matter what we try, nothing works. This is the exception to the rule though. 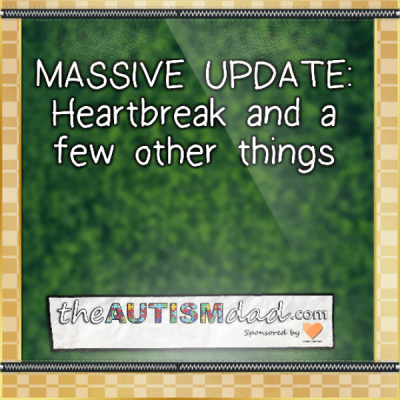 Typically, it’s a struggle and requires a shit load of patience but we can work through it with him.
We don’t have a clue as to why these days happen or what triggers them. It could be anything that has him on edge or stressed out. Something that taps into the limited resources he has to cope with things like this, will easily push him over the edge.

Anyway, that was Emmett’s day..

Elliott got off to a slow start but had a great day at school. He did mention that his best friend is leaving the school and he’s understandably upset. There hasn’t been any further issues in regards to him being picked on or bullied and that’s a huge win.

(((hugs))) continuing to pray for you and your entire family xoxo

(((hugs))) continuing to pray for you and your entire family xoxo