UPDATE: We met with Elliott's pediatrician and it didn't go as planned -

Why I withheld my son’s IVIG infusion this week

UPDATE: We met with Elliott’s pediatrician and it didn’t go as planned


Last Thursday, we took Elliott to the pediatrician because she’s taking over his ADHD management. We were also there to discuss Elliott’s headaches and maybe get a referral to a specialist.

The ADHD part of the appointment went really well. There’s not a great deal to managing ADHD aside from the medication and follow ups every three months.

When we began talking about his headaches or migraines, I asked if this could be related to dehydration. Elliott doesn’t drink nearly enough water and before we go any further down this road, we’re going to focus on his hydration and see if that helps.

Elliott doesn’t drink much of anything during the day and it’s very difficult get him to drink water.

The doctor explained to Elliott that we are absolutely doing the right thing by pushing him to drink water during the day. Our goal moving forward is for him to get at least forty ounces of water per day. I’m not sure how that’s gonna work but it has to happen. 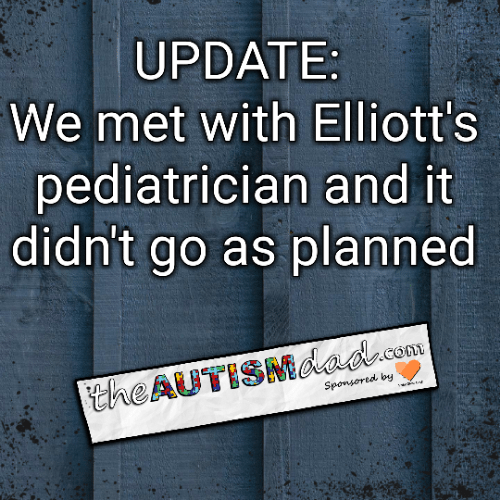 This was not the direction we had expected to go in. We assumed these were migraines because of our extensive family history of headaches. Hopefully, this is as simple as drinking more water.

Lastly, she wants to make a change to his allergy meds because he’s struggling with that a little bit.

She wants him to use a nasal spry because it’s better for his particular situation. Elliott was not happy about that. He did however, reluctantly agree to at least try the nasal spray.

Everything else was fine and she did fax in a new script for occupational therapy as well.

His scripts were delivered yesterday and we’ll attempt the nasal spray tomorrow at bedtime. My hope is that it will help him better manage his allergies.

Emmett has his turn at the pediatrician on Thursday and this will basically be a duplicate appointment for him.

I hope Elliot is feeling as well as can be expected, mom and dad too.

I hope Elliot is feeling as well as can be expected, mom and dad too.