Why I withheld my son's IVIG infusion this week   -

UPDATE: We met with Elliott’s pediatrician and it didn’t go as planned

Limiting screen time for my kids with #Autism

Why I withheld my son’s IVIG infusion this week


I’m pretty sure I told you that Gavin’s IVIG supplies were delivered on Wednesday. What I didn’t explain was that we held off on giving it to him until Friday.

The reason behind that seemingly counterintuitive move was simple.

By the time we could have given him his infusion on Wednesday, it would have been really late in the day. With his next scheduled infusion being essentially twenty four hours away, it was too close together.

If we had gone ahead with a Wednesday infusion, we would have had to push off the Friday infusion, thus fucking up the entire schedule as we worked to get things back on track. 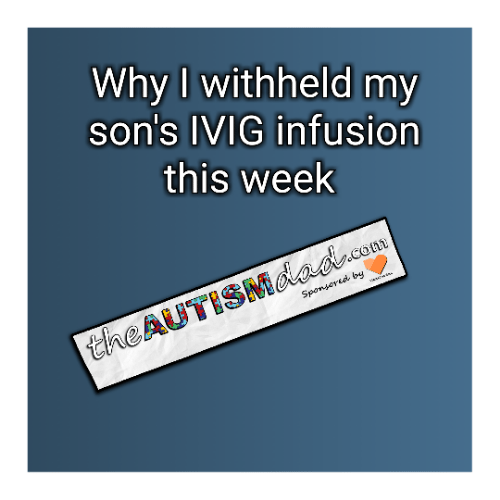 By holding off and waiting until Friday, we were able to preserve the schedule and keep things from getting worse than what they already were.
The timing of these infusions is very purposeful. The reason for that is so we have some overlap time should something happen. Missing one infusion isn’t a huge deal but it’s not something we would do unless we had good reason.

This was outside of our control because the needed supplies weren’t available as a result of the supplier not shipping them. Choosing to hold off until Friday was the best way to recover from this little debacle. We would never hold off for shits and giggles. There has to be a good reason and not having the needed supplies was a pretty good reason.

Anyway, we’re still working on changing to a local supplier but there’s a great deal of red tape we have to cut through first.

In the meantime, Gavin’s got his supplies for the month and is doing fine. I’ll be sure to update when we make some progress on this pending change.