I woke up this morning with a fever. It wasn’t too bad but it was 102°F and that usually means I’m fighting something off. I still had my headache from last night, and on the only day I was able to sleep in, my headache woke me up at 6 AM.

Fast forward to this afternoon, and the boys came home. Elliott want feeling well and sure enough, he has a fever now as well.

On a positive note, Emmett seems to be fever free. He’s 99.5°F,which isn’t a fever medically speaking, but that is the temperature the school sends them home from school. We’re so close to getting Emmett back to school, I can taste it.

Elliott on the other hand, will be home tomorrow.

I’m not sure about Gavin because he came home and went straight to bed. That’s weird for him, because it deviates from his routine and he doesn’t like doing that. I’m concerned he’s not feeling well either. I was trying to ask him how he was doing but he just went to bed in the middle of our conversation.

It’s too late in the day for his meds to be making him sleepy. Who knows? I’ll see how he’s doing when he wakes up.

As for myself, I slept for most of the day. I can’t shake this headache, but my stomach has settled down. At least I don’t feel like puking right now. That’s a major blessing. I don’t do well with nausea.

Everyone is just resting right now, and the house is eerily quiet.

I feel absolutely horrible because I missed my parents thing today. They renewed their vows and had a party afterwards. I haven’t told them but with the boys being at Lizze’s parents last night, we were going to surprise them and show up to mass. The boys would have not done well for that extended period of time, so we weren’t going to do the mass but instead head to the reception.

I began not feeling well, shortly after the boys left yesterday and it hasn’t let up yet.

I honestly don’t know if it’s stress related or if I’m actually sick. I don’t know if stress can cause a fever. I know it does in Emmett but that’s different. Since learning that Elliott is dealing with very similar symptoms, I suspect we have caught whatever is floating around.

Anyway, I’m feeling horrible, both physically and emotionally. I know I let my parents down and that kills me. I know they understand but it doesn’t really matter, because I’m my harshest critic.

To be completely honest, all I want to do is focus on making it through the next day or so and go from there. Lizze has class tomorrow and I may have to get one of the boys to school in the morning. I’m also going to have to take care of whoever is home, get Gavin to have his bloodwork done and do his IVIG infusion.

As long as I can shake this headache, I’ll be okay. This headache seems to really enjoy torturing me right now and I’m not sure it’s going to quit anytime soon. 😁

It’s funny, but not in a haha kinda way. It’s funny in an ironic sorta way, because we have our first break in forever and I’m sick. Having said that, at least I didn’t have to worry about the boys and that makes a big difference. I was able to relax and let my guard down a bit.

I’m really grateful for that. ☺ 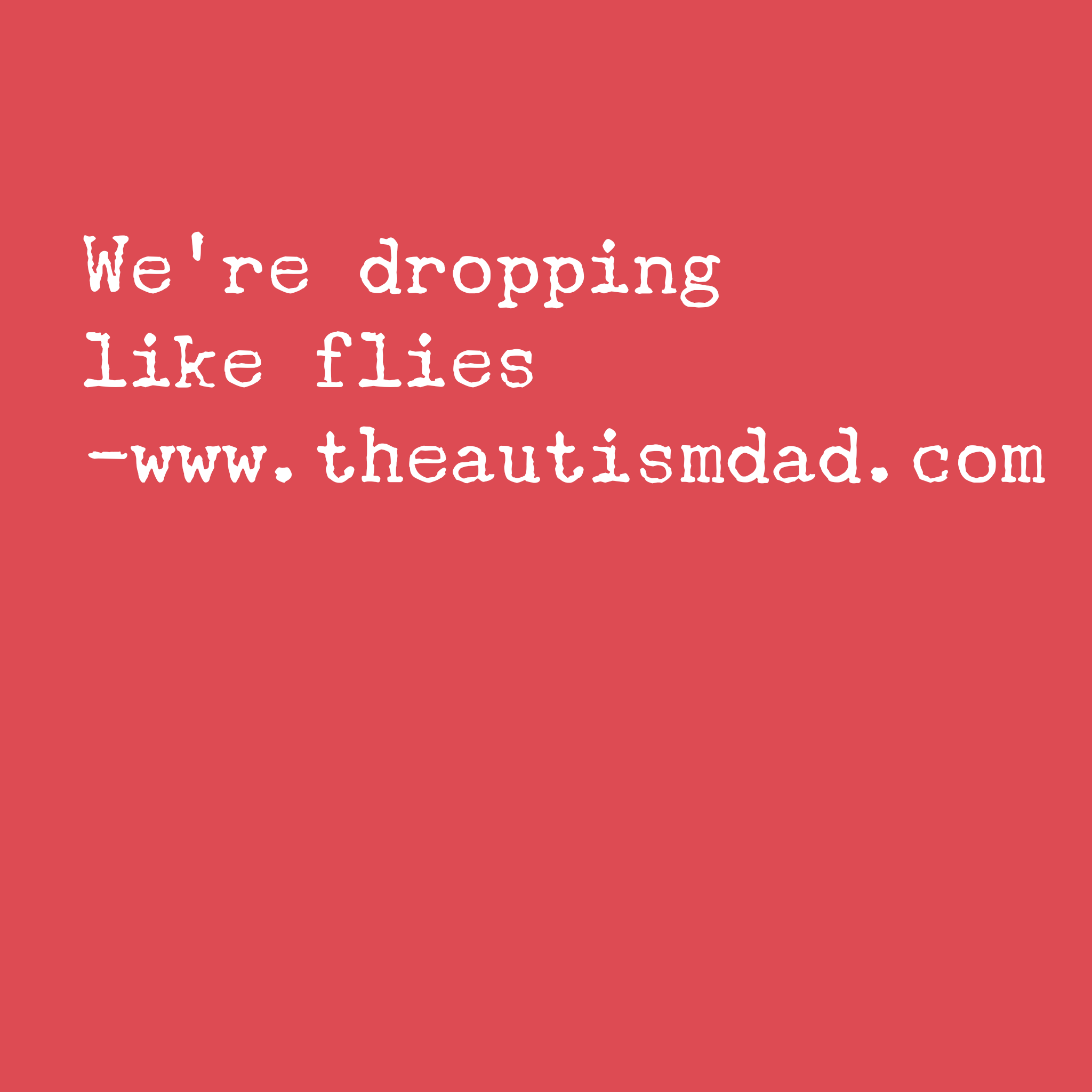 Well, we live across the northern part of Ohio in the west from you, and my oldest got stomach stuff. I always find it interesting when widely separated people have very similar sicknesses. Get well soon, all of you!

Thanks Becky. Hope you guys are in the mend… We seem to be doing better…

Gavin didn’t get his full nap here, but I’m not sure if that’s why he was feeling under the weather. He said he thought he ate too much so thinking maybe his tummy was upset. I knew something was going on with Elliott because he didn’t eat anything at the party, not even dessert. I thought he felt a little warm too. Sorry that everyone is not feeling well. I was sick with some kind of respiratory bug the whole week I was on vacation. 🙁 Hope you all feel better soon!

Thanks. Its anyone’s guess as to what’s going on with Gavin but he is running a low grade fever. That doesn’t necessarily mean anything because we know his brain doesn’t manage his body temperature properly. You’re also right about Elliott, cause he’s definitely not feeling well, still hasn’t eaten anything and is also running a fever.

Thank you again for everything. I was able to sleep while the boys were gone.

Oh, I’m sure those poor bugs don’t know whom they are messing with 🙂