I don't think we overreacted but how would you handle your child being stabbed multiple times with a pencil at school? -

I finally have some really awesome news to share

I don’t think we overreacted but how would you handle your child being stabbed multiple times with a pencil at school?


Lizze and I had a long discussion last night about how to handle the kid that stabbed Emmett because he was returning to school today. We were nervous because we didn’t know what was going on or how to ensure Emmett’s safety.

We decided that there was at least one main thing we would insist upon for a period of time. Assuming that everything else is in check with this kid and he’s allowed to return to school, we want him and Emmett separated until we know this kid is no longer a risk.

I read a couple comments suggesting that boys will be boys but in my world, it’s not okay that Emmett was stabbed four time with a sharpened pencil. It was bad enough to puncture the skin and bleed. That’s not okay and I think most parents would be upset if this happened to their child as well. 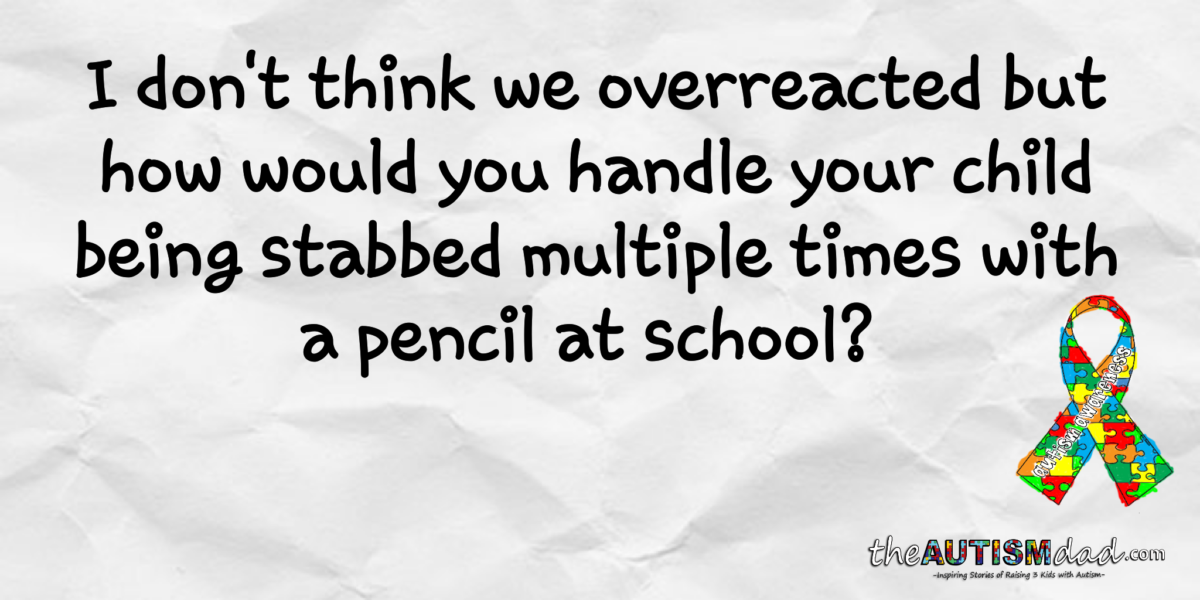 We aren’t looking for revenge or to get the kid expelled. We just want to be sure that Emmett is safe. I don’t think that’s unreasonable and frankly, I don’t give a shit if it is.

Lizze and I spoke with the principal this morning and felt very good because they were already taking those precautions. They’re going to keep them apart for the time being and see how this kid is doing. Emmett’s forgiven him and I think that’s awesome, but we just want to make sure that we aren’t putting him at risk. That seems like the least we should be doing.

Apparently, the issues were medication related and that has supposedly been addressed. I’m glad to hear that for Emmett’s sake and for the sake of this kid.

It’s important to understand that Emmett has been waking up every night since this happened with nightmares. I don’t think he was traumatized or anything like that. I think the issue is that he cannot reconcile how his friend could do that to him. In his head, friends don’t hurt each other. He’s right, at least in the sense that they shouldn’t hurt each other but that’s not always the case.

Emmett will move past the actual events and his injuries, long before he’ll let go of trying to figure out why this happened.

This is why we wanted there to be a separation between the two at first. I want Emmett to feel that he’s safe in the classroom with this kid back in school. I think this is a very reasonable way to help him work through this and hopefully, things will go back to normal. We want them to continue their friendship but we are dealing with special needs kids and there can be a level of unpredictability that simply isn’t found in more neurotypical situations.

I feel like we exercised our due diligence and we’re thankful the school is handling it the way they are. This is just another example of why open lines of communication are important, especially when it comes to school staff… ☺

This whole thing has me very curious. I am wondering why Emmett considers this other child to be his friend and more importantly, does the other child consider Emmett to be his friend. I guess what I am asking is if the friendship is one-sided. Don’t get me wrong, I don’t think it was okay, but I am wondering why this happened. I get that there are medication issues, but what was going on when it all occurred? Was there any sort of argument or did the kid just reach out and stab Emmett in the hand?

This kid was off his meds. What meds they were and what they were for is something I have no knowledge of. He was out of control all day and was goofing around in group. He apparently made some kind of comment about stabbing him in the hand and it not hurting. Emmett thought he was joking and next thing he knows, this kid is stabbing his hand, shoulder, wrist and leg.

Theres really nothing to wrap your head around or understand because this was a special needs kid, off his meds, out of control and with zero impulse control.

There’s no logic to it and trying to understand it will drive you crazy because it’s just one of those things.

Emmett and this kid have been friends for years and I know that to be true. It just is what it is.

If I had to guess, I would think this kid is medicated for something like severe ADHD. ADHD kids off their meds can be a nightmare to deal with. He acted impulsively and without thought of the consequences.

Like I said, I don’t know the details but I’ve been around long enough to know when something isn’t right. I could easily see this being an unmedicated ADHD act of impulsivity.

Makes sense. Thanks for answering.

The school shared another child’s medical history with you?

Per the kids parents…

The school couldn’t tell us anything about that without permission. I suspected that was the case but the parents wanted to assure us that it’s been addressed..