My son’s broken heart kept him up last night

#Autism and Issues with Sleep are Killing Me

Let me start things off by reminding everyone how much I love my kids.  I’ve got tons of new readers and I just want to be clear on that because of the tone of this post.

Gavin is having a really tough day, in several areas of his life. 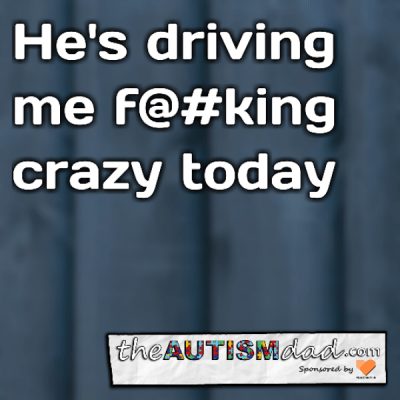 Veteran readers will probably already guess that a large part of this is in regards to his constant, incessant need to talk to me. No one has this much to say and neither does Gavin for that matter.

He’s just talking about totally random things and there’s nothing of any intrinsic value if that makes sense.

What I mean by that is nothing he’s telling me has anything to do with how he’s feeling or what’s going on around him. It’s just random things. It’s like he’s literally just verbalizing his thoughts as they pop into his head.

I’ve had to stop him at least six times today and tell him that I need a break from his talking.  That may sound mean but he needs me to be very direct and not allow for any interpretation. It doesn’t even hurt his feelings. He just gets frustrated that he had to be reminded again.

To be clear… I’m not even close to being mad at him and he knows that. I’m simply exhausted from a terrible night’s sleep again, and his constant talking is breaking me down.

I’m a Daddy on the edge and I really need him to give me a break.

He does try to stop but I think he just forgets a few minutes later and succumbs to the impulse to constantly talk once again. It’s like we never spoke about this before.

It’s things like this that can lead to caregiver burnout over time.  It’s really hard to understand how someone talking can create so much stress unless you’re living with an incessant talker. He’s probably manic right now and it’s not his fault. I just need to be able to get away from the talking every once in awhile.

After all, I’m only human..

Show of hands….  Who can relate?  Please leave your comments below.. ☺