Sensory Processing Disorder: Unless you live it, you probably won't get it -

Do you ever have one of these days?

Sensory Processing Disorder: Unless you live it, you probably won’t get it


This morning was the stuff of nightmares. It’s picture day at school, and both Elliott and Emmett are dressed up, looking quite spiffy. Both were excited about pictures and very much looking forward to going to school.

Then it became time for shoes and socks.

Emmett went into it with a fantastic can-do attitude, as did Lizze and I. Unfortunately, all the great attitude, positive thoughts and hopeful outlooks in the world, can’t seem to counter the nightmare that is sensory processing disorder.

We worked with Emmett for almost one hour and forty-five minutes but were unable to work through it.

Emmett kept wanting to try different options, but even flip-flops were feeling too funny to tolerate.

Poor Emmett was so upset that he was going to miss pictures and there was absolutely no workable solution.

Poor Elliott was so upset because of how upset Emmett was; he made himself physically ill.

Elliott’s anxiety was through the roof, and Emmett was hysterical. Lizze and I decided to throw in the towel and write the day off. That decision didn’t come easy, but we were neck deep in the worst morning I can remember having in a very long time and didn’t know what else to do. 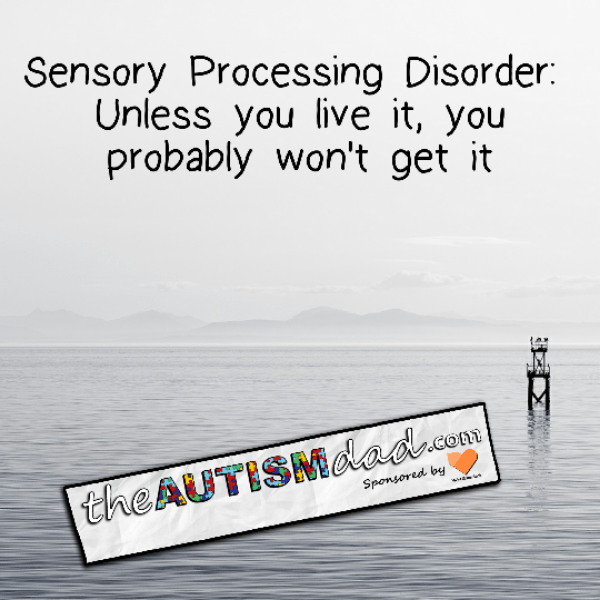 I’m not gonna lie, Lizze and I were spent. By the time we reached our decision to write off the day, we were in survival mode.
The only thing I can say is that unless you’re dealing with this level of sensory processing disorder, you can’t understand how hard it is for the entire family, let alone the person dealing with it first hand.

Please don’t take any offense to that because it’s not meant to be taken as such. It’s just very difficult to truly grasp how disruptive and impossibly complex this comorbid cousin of Autism can be unless you’re in the trenches.

There is no part of me that wants to keep Emmett home from school because of his shoes and socks, but there is truly no other option. We do so out of compassion.

We are approaching this from both an occupational therapy and a psychological angle. At this point in time, we have found nothing that works and have tried everything that we can. Even our specialists are stumped.

This doesn’t mean we’re giving up, though. We’re always looking for new ideas and recycling old ideas that didn’t work before.

Totally get this, all it takes is one thing to set my eldest’s anxiety off and it’s so hard to get him centred again. It is truly exhausting and people don’t understand how draining it is for most things to be a battlefield rather than an enjoyable experience for parent and child. It is all on my shoulders as family don’t understand or really want to know. Yet they expect me to easily get a job whilst navigating everything on my own. I have had many jobs and they have all been a piece of cake compared with being a parent to a child with autism (which apparently I am imagining). Sorry for rant, just to say I understand.

Wow. It’s nice to meet you Suz. You’re among people who get it, so welcome. 🙂

I’ve never heard of this disorder but it makes sense. Sounds like a very challenging thing to deal with – kudos to you both for coping so well.

A perhaps silly question but perhaps slightly on point,

My 7.5 year old has a thing about touching or using metal eating implements, he says he doesn’t like the feel of the metal in his hands, we have to either use plastic or wooden handled implements or wrap the metal in paper for him to use it. We’ve tried warming up the handles, we have tried cooling them, nothing works. We have a similar issue with the zips on jeans and trousers and metal studs on jeans.

It’s by no means as extreme as what you guys are experiencing but still difficult to cope with.

I get this. It’s a texture problem. Unfortunately it means dressing in clothing that might irritate your kids.
I’m somebody who hates putting suncream on myself. But i do it regardless because i have pale skin.

you did the right thing. You both tried your best to work through it but at the end keeping them home was the only option.

you did the right thing. You both tried your best to work through it but at the end keeping them home was the only option.