This is what happened at Emmett's doctors appointment -

There are times as his father, I have to turn away and cry

I was reminded this morning that I never updated y’all on how Emmett’s doctors appointment went on Tuesday. I’m still having bad days so things are slipping through the cracks and this was one of them.

Anyway, on to the update.

Emmett’s been dealing with chronic tummyaches for a very long time. We’ve had him seen countless times, just to be sure all was okay, and it always is. That being said, the tummy aches are real and they’re causing him to miss school.

The down and dirty is that there aren’t any obvious issues. 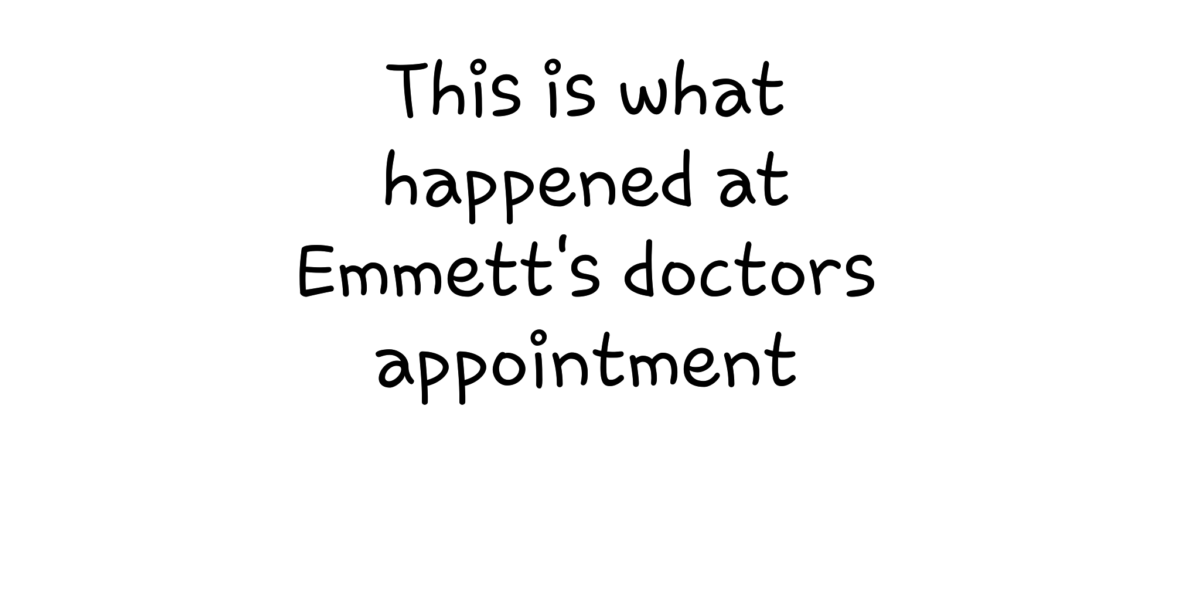 He is scheduled to see his Gastroenterologist in late April but until then, we are trying a few things.

One big thing we’re doing is increasing his intake of water. Dehydration can easily cause complications that can lead to chronic tummy aches. It makes things much harder to pass and that can cause tummy aches.

We’re putting him on daily Miralax to assist in this department as well.

These two things are the first steps in helping him deal with any physical causes for these tummy aches. The other side of the coin is emotional. Anxiety and stress play a roll in this as well. That is something that will be a continued effort within a therapeutic environment.

I think I mentioned previously that I spoke with the school they are addressing a major issue on their end.

That issue is that when Emmett doesn’t feel well at school, his teachers don’t call us, so we can get him. This is a major emotional hurdle for Emmett and frankly, a serious trust issue as well.

When we get him to at least try school, it’s always under the guise that of he’s not feeling well, we will come get him. Unfortunately, his teachers don’t play along and therefore Emmett no longer trusts that we will pick him up if he still isn’t feeling well.

We’ve tried many times to ensure that everyone is on the same page but nothing ever helps and as a result, we push him less because we don’t trust that they will call us either.

I spoke with the principal last week, at length. He said that there will simply not be any wiggle room. If Emmett doesn’t feel, they have no choice but to send him to the office and we will be called. This has already proved to be ignored by the teachers this week, but that’s for another post.

That is pretty much where we stand at this point. Emmett’s drinking more water and that seems to be helping some. Where we go from here depends greatly on how things go in the coming weeks.

We have a 34 yr. old son on the Autism spectrum. We’ve had him to local gastroenterologists to no resolution but finally traveled to Philadelphia and found one who has experience treating people on the autism spectrum. We just traveled to Temple Hospital yesterday for our son to take a 3 hr. breath test. This determines if he has an overgrowth of bad bacteria in his intestines that are causing his gastro problems. We will have those results from the attending doctor on his next visit first week of April. Like the majority of people with autism he has had gastro problems since a child. If he proves to have overgrowth of bad bacteria, his doctor can then prescribed a regiment to at least eliminate the bad bacteria and replace it with non harmful bacteria and we will see if that helps.

Does he eat vegetables or any high fiber foods? Beans or fruits with the skin on? Nuts or berries? Whole grain pasta or bread?

Are we talking about the same Emmett? Lol

We’re lucky to get him to eat anything. Being picky is not possible.

Oh, I know he’s hard to feed but I was wondering if any of his allowed foods were high in fiber. Vegetables especially can be prepared in so many different ways, and if he likes pasta it might be worth it to try some of the vegetable or whole wheat pastas that are available. Fruit smoothies would work too. I just think it would be a shame to have to give a give an otherwise healthy child Miralax to keep them regular when most kids are basically poop factories.

Miralax isn’t for keep him regular, it’s more for correcting the problem and that allows a clean slate so to speak. I wish there was something I could do help him expand his menu but it’s slowly growing and now he eats steak. That’s something…