For all those new to our story and even those who may need a refresher course, I thought this might help put Gavin’s situation into perspective. The embedded image is a list of his current diagnoses.

The first thing is that they have Schizoaffective Disorder labeled as Bipolar Affective Disorder. That’s because they are apparently different ways of saying the same thing.  Bipolar and Schizophrenia are on opposite sides of the same spectrum.

The second thing you may notice is that Childhood Disintegrative Disorder is not listed.

This is simply because the list was printed out prior to the Cleveland Clinic learning of the diagnosis.  Gavin was diagnosed with CDD since the last we were last at the Cleveland Clinic and so it will be on the list next time.  It may actually be listed now and printable via his MyChart account.  I’ll look into that.

Lastly,  I noticed that they don’t have Common Variable Immunodeficiency or Epilepsy listed for some reason.

UPDATE: I just realized that the diagnoses listed are only things actually diagnosed by the Cleveland Clinic.  The immuno stuff, epilepsy and CDD were all diagnosed either by Akron Children’s Hospital or his psychiatric team.  Now the list makes more sense.  Some the psychological things were confirmed by the Cleveland Clinic years ago when Gavin was hospitalized for delirium.  Hope that makes sense you because now it makes sense to me.. 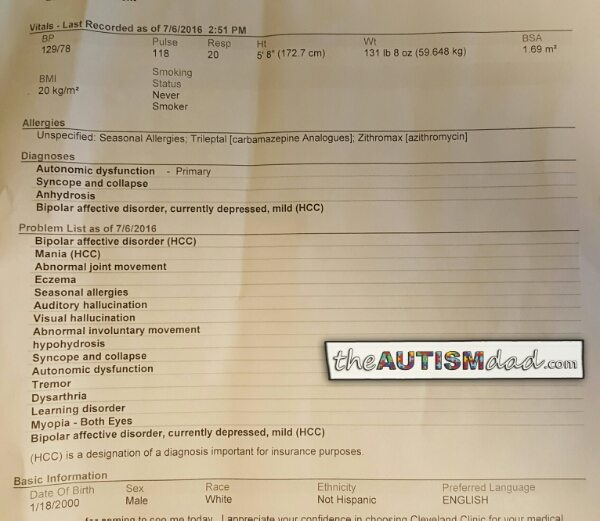