A MAJOR Victory flew under the radar yesterday

5 Surprising Benefits Of Playing A Humble Board Game


It’s been about a month since I took my final dose of Paxil. To say it’s been an easy process would be a boldface lie. Frankly, it’s been an absolute nightmare. Slowly lowering my dose over 90 days was rough but it didn’t truly suck until the Paxil was completely out of my system.

Having taken my last dose about 30 days ago, the medication has been out of my system for about the last 25 or 26 days. It’s a very short half life and that’s one of the reasons it’s so hard to come off of.

For the first week or two, I was completely overcome by emotion.

It was like Paxil had been functioning like a dam and when it was gone, the emotions it had kept at bay, came flooding back. It was incredibly intense and absolutely overwhelming. I cried over everything and I couldn’t help it.

The nausea and insomnia were awful. It’s been about a month since my last dose, and I’m just now getting my sleep cycle back but the nausea is still an ongoing issue. I can’t eat without feeling sick but I feel sick anyway, and eating is a necessity so…… 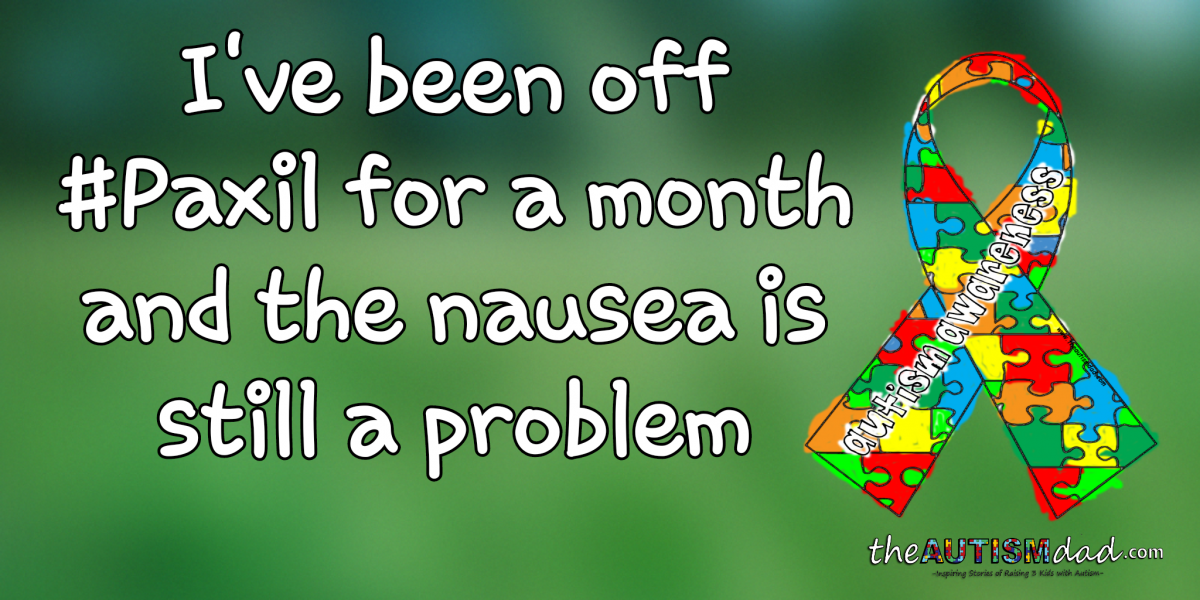 I feel like I’m back in control of my emotions again and that’s a good feeling. I feel things with more intensity but it’s not as overwhelming for me anymore.

The nausea sucks though and there’s nothing I can do but push through it. The more active I am, the better I feel. As such, I’m trying to remain as active as I can. Right now I’m simply setting step goals for each day and I’ll build from there.

I never would have thought that a medication that can have such a positive impact on depression, could be so horrible to come off of. The fact is, and I learned this the hard way, coming off of Paxil is very much like coming off of heroin for many people. There were plenty of times that I wanted nothing more than to go back on it, just to make this all stop.

I spoke with an psychiatrist, who’s also an addiction specialist and he confirmed the heroin statement I made above and explained that he won’t prescribe Paxil for that very reason.

If you know someone who’s coming off of Paxil and their miserable, please understand that this is a very real problem and some people actually end up in the hospital because the withdrawal is so bad. Please take them seriously, offer help where you can and most of all, show them compassion. This is very real and it’s truly an awful experience, but it’s an experience that should go away in time.

I’ve been on Paxil for a long time and my doc wants to switch my meds now. I’m absolutely terrified of the withdrawals. It sounds horrific. I hope you’re doing okay. Thanks for sharing

Don’t be afraid. Just educate yourself and take lots of time to ween off. If your doctor is switching you to Prozac, you might not have any issues at all.

Statistically speaking, most people do just fine coming off of Paxil, I’m not one of those people. If I had taken more than 90 days, I might have been okay.

My goal wasn’t to scare anyone but rather make people aware that this does happen and before coming off of Paxil or Effexor, to educate yourself on the process and for the love of God, don’t do it without medical supervision.

I appreciate the honesty that you’re sharing. How much were you on? Were you able to work during this? And did you switch to a diff med? Sorry for the million questions! If you’d rather email me at
Thanks!

You’re welcome. I’ll answer your questions here. I deleted you email so you don’t get unwanted emails from bots who may detect it.

I was on 40mg/day for about 6 years. I didn’t switch to a different medication because I want to try and manage my depression with therapy, diet and exercise. If I’m unable to manage, I’ll probably look at Prozac.

As far as working during the change goes, I’m working from home and this blog is my main source of income. That isn’t always a blessing but it was while I was withdrawaling.

I would think that of you’re switching to a different medication, it might be easier because the other med will take over for the Paxil. Again, this is my personal experience. Most people do fine but some people very much struggle to come off.

My advice would be to listen to your doctor but make sure your doctor understands and takes into account your concerns. Don’t rush it. I took 90 days to go from 40 to zero. If I were to do it over, I would probably double that time frame.

Learn from my experience but don’t assume you’ll react the same. Your doctor is a great resource and if you trust them, Share you concerns and they take you seriously, your in good hands.. ☺

Thanks for the info and the tips! I appreciate your candour and wish you the best in your journeys

Last question I promise! how many mgs to decrease and how long in between?

That’s tough. I can share what I did but you should work out what’s best for you with your doctor. This is NOT medical advice.

I’ll be completely honest. I’m still struggling after being completely off for over a month now. I don’t remember exactly how I came off but here’s a link to every post I wrote about it. In there you will find exactly what I was instructed to do. Again, you should work this out with your doctor and do not simply do what I did. I took 90 days to come off of 40mg/day and if I could do it over, I would have at least doubled the time. I took some pretty big drops and I should have probably not dropped anymore than 5mg a month. The only way to fix that would be for me to go back on and that’s NOT going to happen.

Here’s all the posts: https://www.theautismdad.com/?s=Paxil&submit=Search

Also, you need to read this article that came out a few days ago by the NY Times. If you don’t feel your doctor is taking you seriously, maybe show them this. https://www.nytimes.com/2018/04/07/health/antidepressants-withdrawal-prozac-cymbalta.html

Pressed enter too soon. I do have meds I take each day to help lessen the pain of fibromyalgia. I am not an addict per se, as I can easily forget to take them. But there is that body dependence and if I stopped taking the 2 main meds today I might not sleep for days.

That sounds horrible. I’ll remember if I ever need such a drug NOT to ever take it.

Maybe don’t write it off but keep this in mind… ☺