So this happened last night and it was scary -

We had 4 MAJOR #Autism related hurdles to overcome this morning

So this happened last night and it was scary


Last night while I was trying to get Elliott to sleep, we were startled by flashing lights and people screaming. It was roughly 3 am and I hopped up to see what it was.

All I could see from the first floor was flashlights, maybe thirty feet from my window.

Elliott and I went upstairs, not only for safety reasons but so I could figure out what was happening and if we were in any danger. You may recall that we’ve had some crazy shit happen within a few feet of my house. If you don’t remember, I’ll list the big ones.

Anyway, I was able to go out on my second floor balcony and see what was happening. It turns out the police were chasing someone and they tackled him to the ground, just before he could hop our fence. 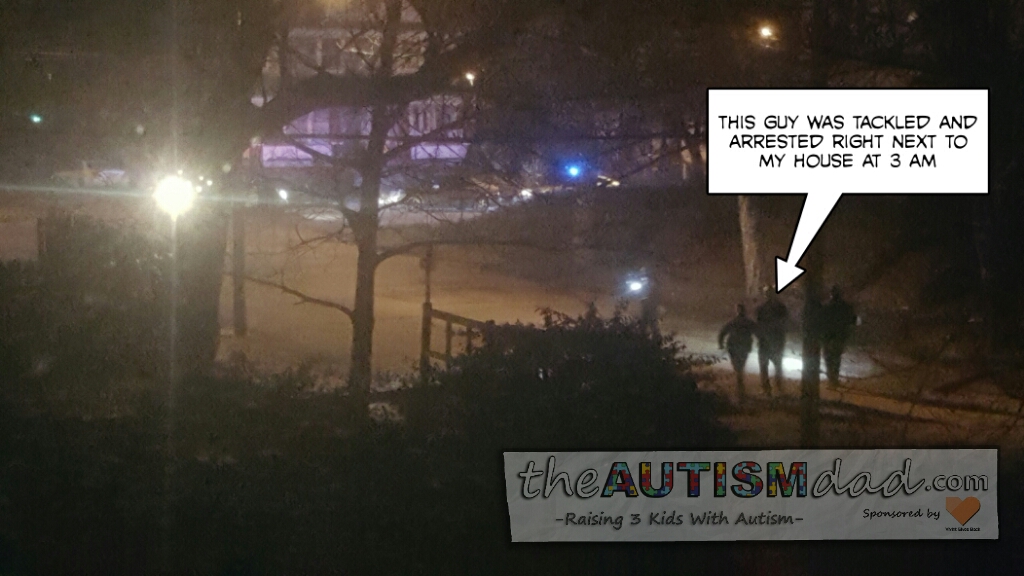 This was the view from my bedroom window

I’m not entirely sure what happened, but it sounded like a drug or dui related thing. The cops had a car surrounded about two doors down and this guy apparently jumped out of the car and fled on foot. I could hear the cop merandizing him and talking about being under the influence. That could mean drugs or alcohol.
The cop apparently noticed I was on my balcony and wanted to make sure I was okay. I was worried about him and I asked him if he was okay. He then asked for my exact address so he could direct backup to the correct location.

Elliott was pretty freaked out but eventually fell asleep.

The excitement lasted a good while longer because they were searching for whatever this guy may have ditched as he was running.

From what I saw, the cop that took him down was doing a really good job. He talked to this guy with respect and while this guy was under arrest, the cop kept making sure he was okay. All this was before he noticed I was watching.