Why did he laugh when our dog died? -

Maggie passed away last night and we’re all heartbroken

Why did he laugh when our dog died?

If you read my last post in regards to Maggie passing away, you may have noticed that I never made mention of Gavin and there was a reason for that. I want to explain and hopefully educate my readers about what we saw or rather didn’t see from Gavin that day. It’s important to understand that Autism can be quite mysterious at times and even though I have experienced and a decent understanding, there are times where it’s difficult for me to grasp as well.

I didn’t mention how Gavin reacted to Maggie passing away because I didn’t want to go down that path until I’d had a chance to process everything.

While Maggie was lying on the floor in our living room, Elliott, Emmett, Lizze and I were devastated because we all knew she was dying. 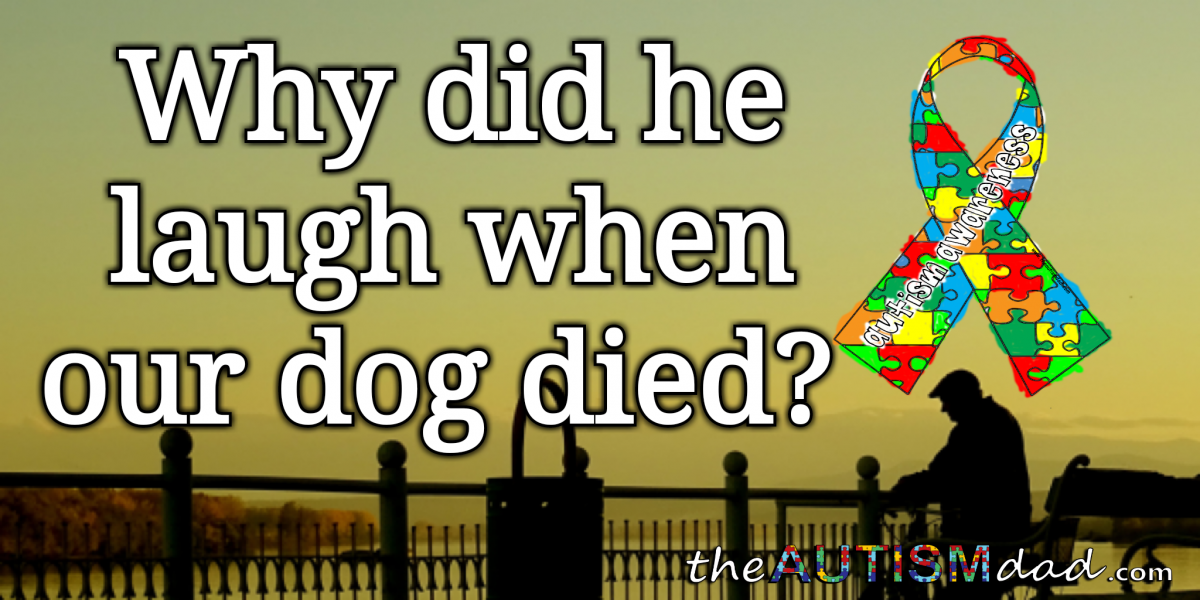 Elliott and Emmett we sobbing hysterically. Gavin walks down the steps, completely oblivious to everything going on around him and goes about his business. When he finally learned what was going on, it would be very, very easy to assume that he didn’t care. He showed absolutely no emotion and in fact, he sat at the top of the steps, laughing.

Gavin is capable of emotion. We know that. If his tablet broke or his latest Lego creation shattered on the floor, he would be distraught. When it came to the dog he’s known for almost a decade, he laughed at the site of her lying on the foyer floor.

The only reason I’m bringing this up is because I think it can be a teaching moment. There’s a common misconception about people with Autism, feeling emotions. This is not accurate. If you take the time to speak to an Autistic adult, you may be surprised to hear that it’s not that they don’t feel emotions, but rather they feel too many emotions. Again, everyone is different and assuming anything about anyone with Autism is generally a bad idea.

Look, this isn’t about trying to make Gavin look bad because looks can be very deceiving at times. It’s about highlighting something is often misunderstood.

During the hour or so between the time we realized there was a major problem with Maggie and we were on our way to the Vet, Gavin never showed any sadness and still hasn’t. Like I said, there were a few times he sat at the top of the steps and laughed out loud, other times he covered his mouth so we couldn’t see him smiling. I’ll be honest, it was absolutely disturbing to see him react like this to such a heartbreaking moment in all our lives.

Elliott and Emmett took notice that Gavin was laughing and were beside themselves with anger. They screamed at him to stop laughing becsuse Maggie was dying. The boys were hurt, angry and confused because they didn’t understand how Gavin could possibly find the worst moment of their young lives, funny.

I had to make Gavin leave the room because it really was upsetting to experience his response and I have a decent understanding of why he reacted this way.

So we’re absolutely clear, Gavin is not a heartless monster, even if his reaction made him appear to be at the time.

Gavin has never been good with emotionally charged situations. In his teens, Gavin would still get frightened and run out of the room while watching simple cartoons, like Blues Clues because they’re too emotionally charged for him. Yet when the dog he’s known for most of his life is dying, he laughs as though it was funny. Neither reaction to the above situations is likely something you’d consider appropriate but it’s just the way he’s always been.

Emotions simply don’t come easy to Gavin. I know he feels things and he’s not emotion-less. It’s just that with Gavin, the signals get crossed along the way. He reacts to emotional situations in a way that could easily be consider the opposite of how he should be reacting. Generally speaking, people cry when their sad. Well, Gavin laughs.

Even if you removed Autism from the situation completely, you still have to allow for the notion that everyone deals with things like loss, in different ways.

I understand why the boys are upset with Gavin for laughing as Maggie was dying. Frankly, it was upsetting to me as well, but at the end of the day, Gavin’s laughing was much less about taking pleasure in Maggie’s death but rather being so overwhelmed by everything, he simply didn’t know how to react.

That doesn’t make it easier to live with or witness, but it’s important to understand that not everything is as it appears on the surface.

I should also stress that not every person with Autism reacts like this and assuming so would not only be inaccurate but also irresponsible. I’m simply sharing what our experience was and how we struggled with Gavin’s reaction. I’m working with the boys to help them understand that everyone reacts differently to emotional situations.

I can totally understand how this behavior could be misconstrued as creepy, inappropriate or even sociopathic in nature. Gavin is simply one of those people who doesn’t react appropriately to emotional stimulus but that doesn’t mean he doesn’t feel anything. It more likely means he feels too much and doesn’t respond appropriately as a result.

It’s not always easy to look beneath the surface but it’s important to at least try and do so in situations like this.

When my grampa died, I was struck hard. My son CJ with ASD was 14, I think, and came to my room while I was sobbing into my pillow. He put his arm around me and said, “You know mom, I know you’re really sad about Big Papa dying.” I made a snuffly “mm hmm” noise or something, trying to sob into the pillow instead of waking the baby in the bassinet. CJ said, “I think this is going to sound bad, but I’m just not as sad as you, I think because I didn’t know him very well. Is that okay?”
I hugged him and said, “Don’t worry, buddy. I’m not mad. You just saying, “I know you’re sad, mom” means a lot.” and it did.
We were all figuring out CJ’s emotions and how to share them.
Strangely enough, my fiance at the time (my daughter’s dad), kinda looked at me and didn’t know what to do. He was never close to his family so he had no way to relate.
My 14 year old son embraced me, even though he didn’t share the same emotional loss that I did.
When my daughter gets overstimulated, she runs away and slams doors, even when she’s happy and excited. Her little brain doesn’t know how to handle such strong emotional baggage, so the brain goes to “flight” mode.
Communication of emotions is tricky. Nobody is ever right or wrong – wires get crossed and sometimes the system needs a reboot.