I feel like we’re off to a good start


I love Gavin. I truly love Gavin. At the same time, the idea of having to deal with his challenges for the rest of my life is scary. I just dealt with a problem and he’s still upstairs freaking out. Here’s what happened.

Gavin came out of the kitchen and told me that he needs to wash his water bottle again because the water tastes bad. I asked him what happened and he couldn’t explain it. He had just washed his water bottle earlier today and he was unable to figure out why it rated so bad.

As soon as he said that, I knew what had happened. Rather than letting him struggle to figure it out and end up melting down, I wanted to help him work through the problem.

Problem-solving skills are one of the many things that have deteriorated over the years, and it’s important that we practice as much as possible. 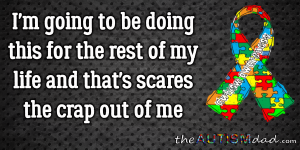 When he told me that he’d washed it already today, and now the water tastes funny, my brain immediately went to there being soap residue left over in the bottle. I figured that’s probably what he’s tasting. I explained that to him and he argued that I was wrong.

I wanted him to think through this with me so we could problem solve it together. He told me that he’d rinsed the soap out of the bottle, so that couldn’t possibly be the problem.

I explained to him that soap residue can be very difficult to remove sometimes, especially from plastic. It’s even more difficult when you can’t fit your hand inside the container to physically wipe it out. He continued to argue and now he was being to contort his body, as he tensed up because he’s getting more upset.

Things got weird from that point because he began telling me it tastes like toilet water and not soap. I asked him how he would even know what that tasted like and he began profusely denying that he’d been drinking out of the toilet. If you read back far enough, you’ll learn that he actually used to do that when he was little. We also dealt a great deal with PICA.

The reason this is worth mentioning is because historically, when he begins denying doing something I haven’t even asked him if he had done, it means he has been doing exactly what he’s denying doing.

We’ll deal with that later.

Anyway, I got tired of being yelled at and I tried one last time to help him work through this. I pointed out to him that if his water bottle was fine before he washed it with soap, and now his water tastes funny after he washed it with soap, what else could the problem possibly be. He just began hitting himself in the head and I decided to pull the plug on trying to help him.

I told him to go into the kitchen, fill his water bottle up, put the lid on and shake it up. If suds appear in the water, it’s because there’s still soap residue and he will need to rinse it out a few more times.

A few minutes later, he came into the living room way more upset than when he left.

Turns out I was right about the soap and that made him angry. Gavin doesn’t like being wrong or making mistakes and he just screamed at me. He kept calling himself stupid because he couldn’t figure that out without help. I told that he’s not stupid. I knew it was a problem he’d never dealt with before and that’s why I was guiding him through it. I asked him how he’s was supposed to know it was soap if he’d never experienced anything like this before. I told him that just because he didn’t believe me that it was soap causing the problem, doesn’t mean he’s stupid.

No one knows everything and we’re all still learning. Now he knows and if it were to happen again, he’ll know what to do.

I know that the reality is, he won’t know what to do if this happens again but at least we’re not giving up. Maybe the next time, it will only take a prompt for him to put two and two together, before figuring out what the problem is.

As a parent, who’s also a human being, this is incredibly frustrating. I’ve been doing this kind of thing with him for well over a decade and it’s only going to get worse as we move forward. Childhood Disintegrative Disorder doesn’t have a positive outcome and he will continue to deteriorate over time.

It’s absolutely heartbreaking but at the same time, I find myself questioning whether or not I have the strength to do this, over and over and over again, for the rest of my life.