#Autism Parenting Question of the Day for July 1, 2018

Documenting Your Family Life Can Be A Real Adventure


It’s been a really long and frustrating day. We were disappointed that we had to postpone our hike due to high temperatures but it is what it is.

Instead, Emmett and I took on what was supposed to be a simple project and it turned out to be anything but. I’ll try and sum it up a quickly as I can because I’m exhausted and hoping to actually fall asleep tonight.

We had to remove an old, broken garbage disposal and convert the sink about to a standard drain. That was a relatively simple task aside from nothing coming apart the way it was supposed to because whoever installed it, screwed all the connections together and decided that wasn’t enough. They opted to then cover everything with what appears to be rubber cement. It was a nightmare to remove the disposal.

I actually had to break all the plastic connections and pry them apart in order to remove it. I was very quickly reminded of why I had been putting this off for so long.

We had to replace and install new baskets on both sides of the sink. We then had to replumb everything, which wasn’t a huge deal. Emmett and I had that knocked out quickly. 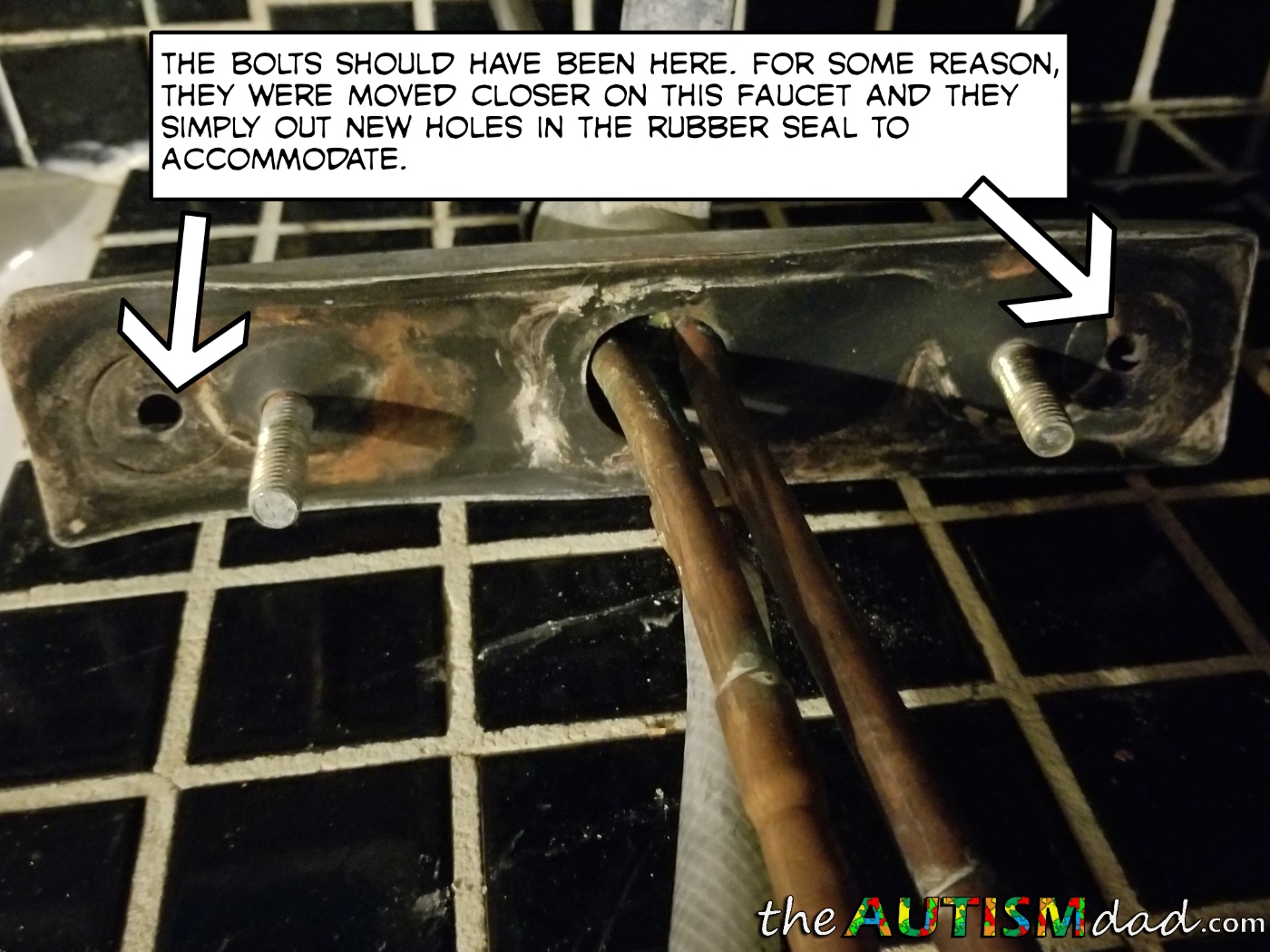 As we were putting everything back together, we realized that we needed to replace the squirter/spray thingy and it make sense to do it now while it was all torn apart. That tuned into replacing the entire faucet because it was leaking, at least 20 or 30 years old and beyond repair.

The first faucet we picked up wouldn’t fit for two reasons. The first was I forgot about the windowsill. It was simply too tall. The other issue was the center stem was too big for the center hole. We returned it for a simpler, standard faucet with a four hole connection setup.

Faucets come in three different standard configurations. There’s a single, three or four hole connection setup. The one we were replacing was a four hole connection. It can be replaced with anything really. It’s a matter of covering up any holes that aren’t being used. It’s more cosmetic. 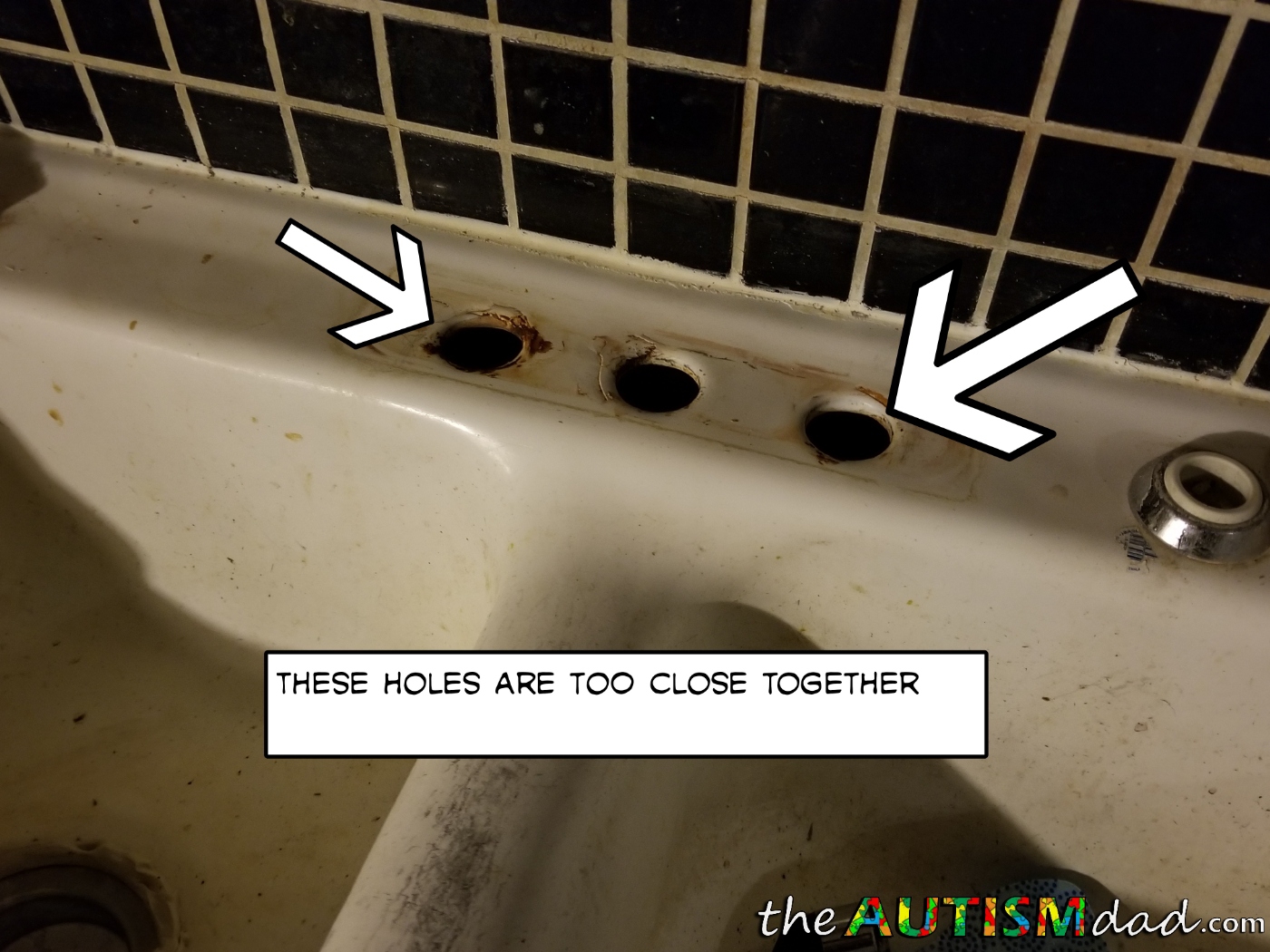 We figured that all would be right now.

Unfortunately, the term standard doesn’t apply to anything in my house because the four hole connection in my house is nonstandard. We found that out the hard way.

Everything is supposed to be standard for a reason. Our sink has the holes closer together and therefor nothing I can buy at home depot will fit. At this point we have two options. We can try to find a faucet that has nonstandard bolt placement but that’s going to be challenging. The only other solution is to drill new holes or at least make the center hole bigger. The problem with that is the sink is porcelain and the area where the faucet goes is incredibly thin.

I could end up cracking the sink and destroying it completely. That’s a really bad thing because to replacing the sink would be a nightmare. Our counter is made of small, individually laid porcelain tiles. The outside flange of the sink was tiled over meaning we would have to rip off the tiles to replace the sink. It’s really a messed up situation that has left Emmett and I very frustrated.

We made three or four trips to Home Depot and we have to return again to return this faucet.

I made the mistake of assuming since all faucet were supposed to standard, that it would fit. I had no idea our sink would be the exception.

I don’t know what we’re going to do but we at least have to return the current faucet. The absolute last resort will be drilling a hole. What I might do however, is enlarge the center hole. That would be easier and safer than drilling. It’s barely too small, so it’s not going to take much to make a single hole connection work.

Emmett and I are learning as we go but it’s much harder because of the whacked out way our house was built. ☺

Get a plumber in to fix it.

That would take the fun out of it…. ☺