Gavin had his first meltdown in almost a year :(

I probably need more help than I’m getting

Gavin had his first meltdown in almost a year :(


While at therapy tonight, Gavin was building with this castle set. It wasn’t going together easily and he began to get frustrated.

I asked him if he was okay and suggested he take a break.

Gavin got really upset and started standing on the side of his ankles, if you can picture that. When he does this, it looks like his foot was just snapped off.

Anyway, he was starting to hit himself but nothing too serious.

I tried to de-escalate the situation but the meltdown engine had already turned over.

This is scary for me because I’m beginning to see him slipping more and more. On the positive side and much to Gavin’s credit, this wasn’t anything super significant.

Dr. Pattie and I eventually back out of it and just sorta let him go because we were only making things worse by trying to help him.

This simply needed to run its course.

Gavin did meltdown but he never got out of control and he sorta removed himself off to the side and waited until he was calmed down before returning to play with his brothers.

Gavin was frustrated with himself and not upset at anyone else. While he was clearly struggling to maintain, it could have been so much worse.

This is significant and worth talking about because this was the first time I’d seen anything even remotely this intense, in almost a year.

I am concerned but at the same time, this would be considered a typical ASD related meltdown and extremely mild by Gavin standards. 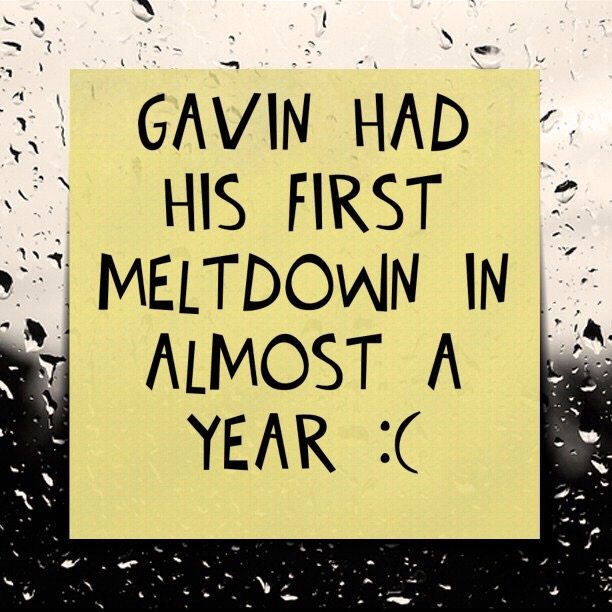 1 meltdown in almosr a year should be a good thing.

The last time I had a meltdown was about two months ago and it was quite a bit more controlled than ones in the past. My mother was surprised at how much more under control I was.
Many of the methods I’ve been using to reduce the meltdowns (mostly compartmentalizing techniques that retarget my emotions more appropriately) actually kicked in instinctually to trigger flight instead of fight and make me properly express frustration instead of just randomly lashing out.
It sounds like Gavin is starting to do the same thing, much younger than me as well. You should be very proud. It took me until I was at least 25 years old to get where Gavin is now. It took me until I was 35 to perfect it