I received some bad news about Gavin and school

I have the first of three IEP meetings this morning O_o


First of all, the boys and I have started using Periscope to live broadcast moments in our life. We figure that maybe people can learn something or perhaps we can help someone.

Out of nowhere today, Gavin became hysterical after he asked to take the trash out.

He came back in the house, went upstairs to his room and started freaking out. When I asked him what was wrong, he said that while he was taking out the trash, he couldn’t stop thinking about someone sneaking up on him and pulling a gun.

This sorta came out of nowhere but at the same time, he been indicating that he’s uncomfortable in our neighborhood since the hostage crisis a couple of months ago. 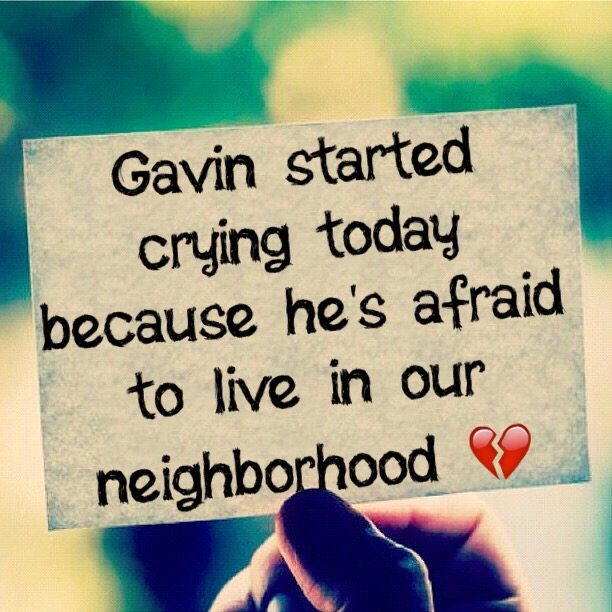 I tried to talk to him about it but then he said he keeps seeing the people he loves getting shot and that makes him really sad.

Gavin and I talked about it in his room but he was so upset that the boys heard him and I thought it was best to have a little family discussion about things.

We decided to discuss how we are keeping ourselves safe on a Periscope video.  It was a good chance to talk about what’s going on and provide some insight into some of the challenges we are facing.

The boys feel like they have their own TV show but this was something that I thought was important to discuss a bit because I know we are far from the only people living in a bad neighborhood.

I hate video in portrait but that’s all Periscope allows right now.

The boys shared their feelings and Gavin especially, did an amazing job of voicing his concerns.

The response was overwhelmingly positive. Gavin felt really good to see all the positive things people were saying about how brave he was to share.

This allowed me to sorta redirect his fear into something more positive and productive. They all feel like they helped other people out by discussing safety things and feel better about our situation because they learned they aren’t the only ones feeling this way.

I’d say that was a positive outcome.

The reality is that we really do need to move. There have been too many close calls but we’re doing what we can to make the best out of a bad situation.

There’s only so much I can do right now and I will move is out of here the very first chance I get.

I really stressed with the boys that it’s okay to be nervous or scared because it means they will be more aware of what’s going on around them. That helps to keep everyone safe. 👍😀❤️

So proud of my boys.

I hope you are able to relocate soon, Rob. You shouldn’t have to live like this.

I hope you are able to relocate soon, Rob. You shouldn’t have to live like this.