I was so relieved last night when Emmett finally fell asleep.  He hadn’t slept in a day and a half and I was getting worried.

I was also really tired cause I didn’t sleep during his bout with insomnia.

Unfortunately, Emmett’s having a hard time sleeping tonight once again but I suspect that I know the cause. 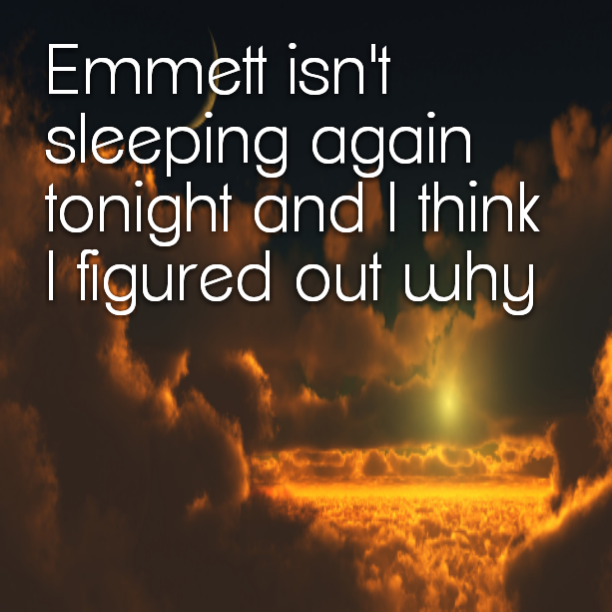 Emmett has a rare fever disorder known as PFAPA.

This fever disorder has evolved over the years and no longer presents the same way.  That’s a good thing because it was really bad for many years and resulted in Emmett having to have surgery.

No one knows what causes this and there is no cure or any real treatment.

What would happen was that Emmett would run a high grade fever and not be sick.  This fever would last 7 – 10 days and would be accompanied by very painful sores that would appear in his mouth/throat.

The fever and sores would go away but come back about 10 days later. This would continue for years.

He was absolutely miserable..

After his surgery, the fever cycles began to change and became more unpredictable.

The fevers ended up being less severe and became less frequent but the mouth sores got much worse.

Emmett missed all of preschool because of this.

The flares seemed to mostly stop in 2014 but began again after his Mom left. The thought is that the stress triggered the reoccurance. It could have also be coincidence but stress is believed to be a factor.

This time, the sores weren’t as bad or they didn’t appear at all.

Now it seems that aside from noticing a significant change in behavior, the only symptom that I can physically detect is that his joints get hot to the touch.

For awhile, his doctors were concerned about rheumatoid arthritis but his levels always checked out okay.  No one knows why his joints get hot but they get hot.

You know when you touch your child’s forehead and you can feel them burning up with fever? That’s what it’s like but only with his joints.

Tonight while we were walking, he was holding my hand and I noticed that his hand was hot.  The rest of his joints were the same way as well.

It occurred to me that perhaps the not sleeping had to do with a pending fever cycle.

He doesn’t complain about any pain or discomfort but he’s not eating much at all and has been really grouchy.

The fever cycle hadn’t occurred to me because I’m still expecting him to complain about the mouth sores.

Anyway, I think this may be behind the issues of late and unfortunately, there’s not really anything I can do but be comforting, understanding and patient.

There’s also the medication change and that could be playing a part as well but he’s definitely in a fever cycle.

I fear it’s going to be a long night…