CHECK OUT THE PICTURES: Have you ever wondered what happens in occupational and physical therapies for kids with #Autism?


So it appears that Mr. Emmett is either sick or in a fever flare again.  I honestly don’t know which is which because while he’s been incredibly grumpy and moody, he’s also not showing any signs of being sick.

The reason this is so confusing is because he’s actually running a fever of 101.8°F.

If this is a fever flare, it’s unusual in the sense that he’s actually running a fever.  I realize that sounds funny because it’s called a fever flare for a reason but his symptoms have changed over the years and fevers aren’t very common for him during a flare anymore. 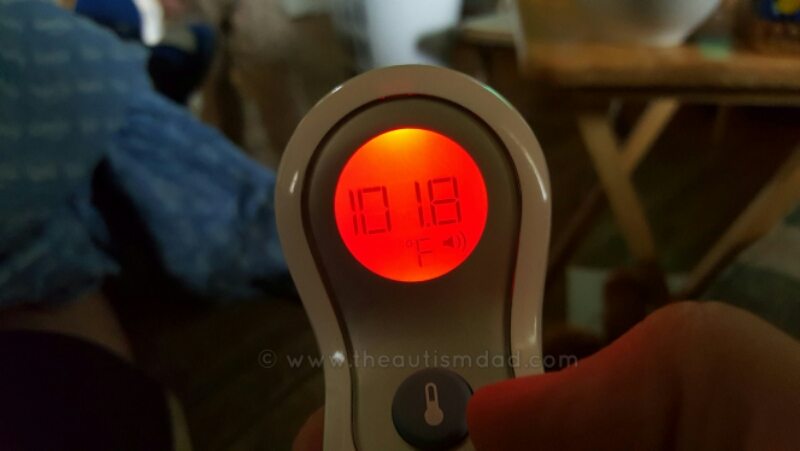 The fact that he’s grumpy and moody does signal a fever flare but at the same time, he could just be getting sick.

This fever disorder has become very irregular and unpredictable as of late and there really isn’t any way to determine what’s what.

Regardless, he’s running a fever and that means if this continues into tonight, he will likely be home from school tomorrow. The schools fever policy is that anything 99.5°F or above, requires the child to either remain home or be sent home.

That seems a bit overreactive but it is what it is.

Situations like these are part of what makes special needs parenting so challenging.  There are so many situations like this where a child can present with symptoms of something but those symptoms can be very misleading.

This is part of the reason Emmett has missed so much school over his short career.  He can run a fever and not be sick but still have to remain home because he’s still running a fever.
I have just one word that describes this insanity and that word is frustrating.

It’s very frustrating for both him and I….