I’ve officially been a single Autism Dad for about a year and a half now.  Truthfully, it’s been longer than that if we’re being honest about it.  That being said, I wanted to share just one of many things that’s harder or more difficult with Autism involved.

Here’s the obligatory disclaimer saying that while everything with Autism is more difficult, loving my kids is easy.. Everyone’s experience will vary depending on their child but these are sorta universal similarities.. Just so we’re all on the same page.

Today I needed to run a couple of very simple errands.

Total distance traveled is maybe a mile and the time involved is just 10 minutes. The reality in my family, it’s nowhere near a simple task because all three of my kids have Autism and I’m a single parent.

I would think anyone who’s a single parent can relate to having to drag the kids everywhere because there’s no one to stay home with them.  That fact crosses the boundaries between parenting and special needs parenting. 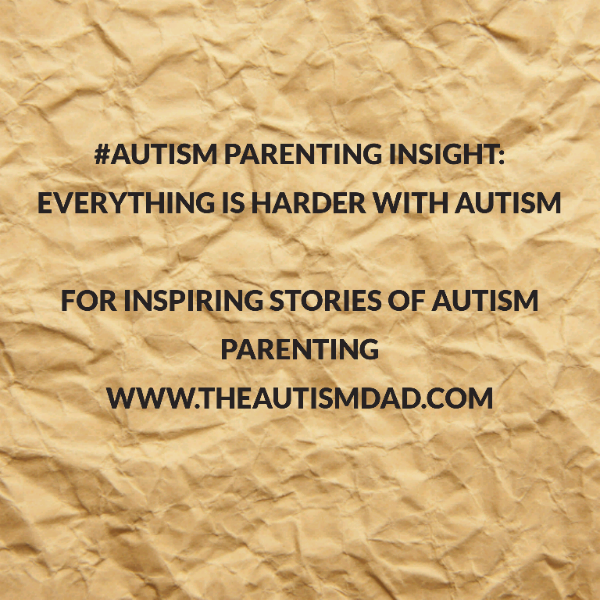 In my case, the entire trip, start to finish, should take 10 minutes or less and it doesn’t require that anyone but Gavin get out of the car.

All I needed to do was pick up pizza for the boys lunch and meds at the pharmacy.

It took me 45 minutes just to get Emmett’s shoes on.  Sensory issues are a bitch for both he and I (pardon my French).  Then it becomes what everyone is going to take for the trip before it moves to having to use the bathroom (which is a lengthy process in and of itself). I know this sounds like I allow this to happen but most parents with kids on the Autism Spectrum will understand that it’s just a battle not worth picking. This is not just a case of the hens running the henhouse.

By the time we were ready to actually walk out the door, about an hour had passed.

We drove to Little Caesar’s and Gavin ran in and got the pizza so I didn’t have to drag everyone in the store (that’s honestly a huge blessing).  On the way back to the house we swung through the drive-thru at Walgreens and picked up everyone’s refills, before heading back home.

The entire trip took 9 minutes to do and over an hour to prepare for.

If I wasn’t single or if Gavin was typical 16 year old, I could have left everyone at home and the saved myself and the boys over an hour of frustration.

This same principle can apply to pretty much any Autism Parenting situation. Things like bedtime, bath time, getting ready for school, any meal, taking medications or even going outside to play are all made immensely more difficult as a result my kids being Autistic.

It’s no one’s fault, least of all my kids.  They don’t have control over many of these things and I’m not the least bit angry.  At the same time it’s incredibly frustrating and absolutely exhausting.

People often ask why I’m so tired all the time and frankly, the question should really be, how am I still awake, semi-coherent and on my feet.