I haven’t actually spoken about this in awhile because until the last few weeks, it hadn’t been an ongoing issue.

We had a really rough start to the year in regards to Elliott and homework.  Things were worked out and adjustments made.  Everything was going really well and then all of a sudden, homework has become a nightmare once again.

Maybe it’s the whole end of the year thing already.  Maybe he’s just spent or maybe it’s something else all together. 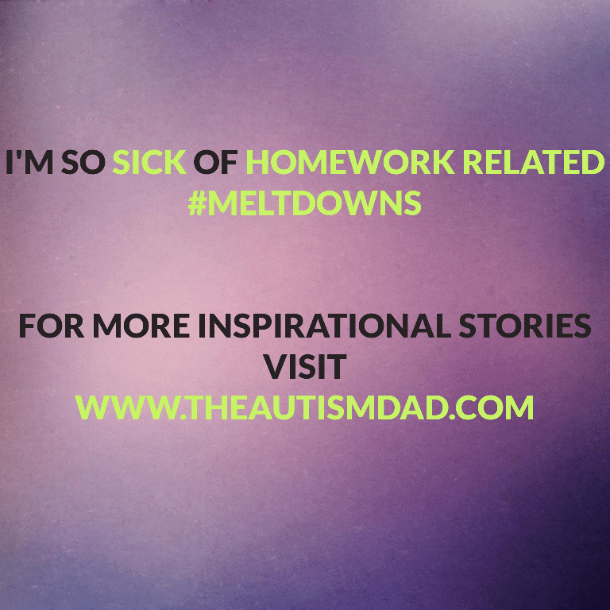 I don’t feel like he’s being difficult for the sake of being difficult. There’s no payoff because no matter what, he’s doing his 9 minutes of homework.  In other words, the meltdowns don’t get him out of anything.

Trust me it’d be so much easier in the short term to just let him out of doing it but it’s not the right thing….

Tonight was particularly bad and it made for a rough ending to a really rough day.

He did do his homework anyway and I commend for that but my goodness was that exhausting.  I don’t fight with him or battle either.  I simply don’t let him do anything else until it’s done.

I do however, have to endure the meltdowns and they’re quite stressful, if I’m being honest.

They just put me on edge and often times remind me of how alone I am because I have no backup or someone to step in when I just need to shutdown.  All I can do is muscle through it and hope that I can relax in time to go to bed……. 😦