NEVER judge an #Autism parent and here's why -

This is the current view from my front window

NEVER judge an #Autism parent and here’s why

I’ll be the first to admit, it’s easy to judge someone or something you don’t understand. Sometimes these are snap judgments based on one’s initial impressions of a situation. Unfortunately, parents like myself and families like mine find ourselves staring down the long barrel of judgment all too often.

I don’t think people are inherently mean-spirited and judgemental. I’d like to think that if they had a better understanding of both myself and my family, they’d be less inclined to cast judgment.

Knowledge is power and the best way to help someone understand something they know nothing about is to educate them. This is my attempt to do just that. 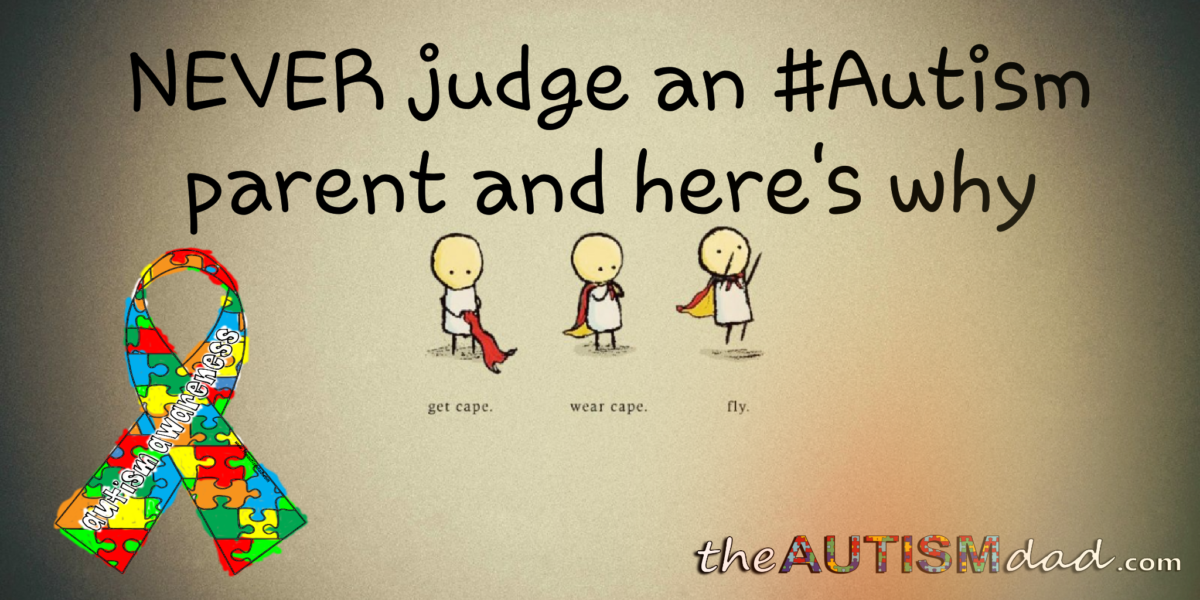 What follows is something that people commonly assume about me and others like myself, with families like mine. I hope to correct the perspective and surround the rest with a more informed perspective. I’m speaking from my personal perspective but this applies to many others out there as well.

One of the things I’ve been most accused of is being lazy or irresponsible. I wish that society could see that there’s world of difference between laziness and pure, unadulterated physical/emotional exhaustion.

As an Autism parent and human being, I’m many things but lazy isn’t one of them. I punched the time clock the very second my first child was born and won’t clock out until my time on this Earth is over. God willing that’s not for a very, very long time.

Truly meaningful breaks are few and far between. Vacations? What are those? My family’s first and only vacation ever was this past fall. It only happened because my oldest son’s health is so fragile that he was granted a wish. It was an amazing experience that my whole family is grateful for but the reality it’s still bittersweet.

I’m tasked with a job that requires superhuman abilities and last time I checked, I’m still only human.

Not only do I grapple with my human limitations and how they impact my ability to care for my kids on the Autism Spectrum, but I also have the extra burden of doing so while struggling with chronic sleep deprivation, Depression, extreme exhaustion and the weight of everything else life has seen fit to pile on me. That’s on top of all the everyday life things we all have to deal with.

I’m exhausted all the time and what sleep I do get is overshadowed by nightmares. I’m terrified of the future and I don’t think a day goes by that I’m not worried about what would happen to my kids if something happened to me.

It’s true, my house is often disorganized. There are piles of laundry, screaming for my attention and a kitchen in shambles. My car needs washing and the yard needs work. I know these things will never get caught up, but it’s not because I’m lazy or irresponsible.

I’m one person. I’m one, very human being and I’m carrying a weight that isn’t always visible to those around me.

I would love to get the house caught up and the yard up to snuff. For that matter, I’d love to be able to better balance everything else in my life but I know that realistically, that’s not going to happen. Don’t mistake that last statement for negativity because it isn’t. It’s reality.

I spend the majority of my time racing around, simply putting out fires. I bounce from one crisis to the next and do so without even shifting gears. There’s always something that pulls me away from what I’d like to be doing and I go where I’m needed because that’s just what I do.

I do my damnedest to hold together a house that shelters three kids with Autism and various other emotional/physical needs that are incredibly demanding. Each of my kids by themselves is three full-time jobs. I get paid in baby steps forward, as well as hugs and kisses. Those things certainly don’t pay the bills but they do make me feel like the richest man in the world.

I’m exhausted all the time and what sleep I do get is overshadowed by nightmares. I’m terrified of the future and I don’t think a day goes by that I’m not worried about what would happen to my kids if something happened to me.

I know I fail to live up to what the outside world deems as responsible parenting. Don’t think for a moment that notion has escaped me because it hasn’t. There isn’t a person alive who is harder on me than me. There’s nothing you can think or say to me that I haven’t thought or said to myself already.

Being an Autism parent is fucking hard. It’s overwhelming, exhausting, terrifying, and endless. I have to function 25 hours a day, 8 days a week, 366 days a year, every single year I’m alive.

My life isn’t perfect. In fact, it’s oftentimes messy and chaotic. My house will never be spotless or organized, and those piles of laundry will be screwing to be done until they’re blue in the face and then some. My yard will always be the one that brings down the property values in our shit-hole of a neighborhood. That’s just the realist in me talking. I know what I have on my plate, and I know what my priorities have to be as well.

I believe I did yesterday at church. They had the kid with them on Easter Sunday with an iPad, head… https://t.co/6p9DwLycvc

@Merry_Mary47 I’m reminded of the adage “Don’t judge a person until you’ve walked a mile in their… https://t.co/4wcic78LaZ

It also happens within the community. My son is very high functioning on the spectrum. Is in a main… https://t.co/iJBSoiO8uV

I hate that you are exhausted and have nightmares. I wish there were something I could do.

@jmrbux2 you are an angel.