The last time we were here, we received devastating news -

I’m so tired of fricking #meltdowns

No sleep for those who desperately need it

The last time we were here, we received devastating news

Today is going to be one of the biggest days we’ve had in awhile, at least as far as Gavin and his health are concerned. Gavin finally gets back into Gastroenterology. We’ve finally come full circle and I’ll explain why.

It’s been awhile since he’s been seen and that’s only because we were basically overrun with unrelated, but life-threatening health issues that took priority.

Gastroenterology was actually what began a huge part of our journey.

We made it to one appointment and within a week of that appointment, the Gastroenterologist called, telling us we needed to get Gavin into Immunology immediately. In fact he’d already made the appointment for us. He’s the one who discovered Gavin’s severely compromised immune system.

The most recent has been an unknown blood disorder and were still waiting on Hematology for.

In the wake of these health crises and an ocean of serious mental health issues, Gastroenterology was placed on the back burner.

As things have finally begun to settle down with Gavin’s health, we’ve been trying to get him back in because he struggles with acid reflux and chronic tummy issues. His doctor had left Akron Children’s Hospital for the Cleveland Clinic and we were on a wait list for the new one. 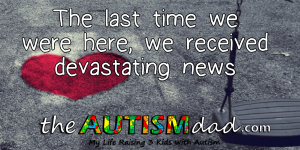 His doctor eventually moved back to Akron Children’s and we were able to schedule with him.

Gavin has some serious digestive issues and possibly an ulcer. When I say serious, I don’t mean life threatening but they impact his life in a negative way nonetheless.

Today’s appointment will be focused on things we know for sure and things we suspect are possibilities.

We know for sure that he’s dealing with acid reflux, at least a few days a week. His pediatrician has been managing that until we could get him back in. We also know he has chronic constipation and he recently told us that there was blood in his poop. Unfortunately, we haven’t seen that for ourselves but we wanted him seen ASAP when we heard that.

We suspect that Gavin has Gastroparesis because he’s always getting sick after he eats. It’s exactly what Lizze deals with and that’s what she has. It’s very likely that Gavin does as well.

It’s important to understand that simply because Gavin says something happened (blood in his poop), or thinks something happened, doesn’t necessarily mean it did. Things like this are very difficult when it comes to Gavin because he’s not a reliable source of information. He simply lacks the capacity.

As I said, this is a big day and a very important appointment. I’m hoping that everything goes well and we can at least get his reflux better managed.

I’m praying that we don’t end up discovering anything serious that we weren’t already aware of. These situations with Gavin have historically brought about bad news and I’m hoping that doesn’t hold true today.

I hope everything goes well, just a small thing but it is a rather large distinction. Your son has been diagnosed with CVID (Common Variable Immunodeficiency) as someone who works and has family members with primary immune disorder, there is a diagnosis of Severe Compromised Immune Deficiency. Those children rarely live to the age of 18 and it is almost always discovered by infancy. People in certain stages of AIDS and with Cancer can have severely comprised immune systems. So can children with DiGeorge syndrome (which I am familiar with). CVID is more common and quite treatable.

Can you clarify what you mean. I don’t want to take offense to something if I’m misunderstanding your words. I’m confused as to your point.. Thanks

I hope it goes well!