Here’s what happened at @AkronChildrens today


It’s been a rough evening thus far, and it’s only 6:30 PM. Gavin has had several freak outs since we’ve been home. A freak out is not the same thing as a meltdown because they typically don’t last as long. Basically, this is what we call it when Gavin gets really upset over something and begins hitting himself or comforting his body.

These things can occur during a meltdown as well but meltdowns typically involve screaming and a significant amount of emotional purging.

When Gavin freaks out, it’s usually because he’s pissed off or frustrated over something. These incidents didn’t last more than a couple minutes a piece but those few minutes are exhausting because we never really know what’s going to happen.

The reason he was freaking out was that he had made a few mistakes while doing something. No one was mad at him and we kept telling him to let it go because everyone makes mistakes. It didn’t really help at all.

Like I said, thankfully these were shorter episodes and he seems to be doing fine now.

I have to keep in mind that it’s been a long day for him and it took a lot out of him. Hopefully, he’ll be okay for the rest of the day because I hate seeing him upset like this. 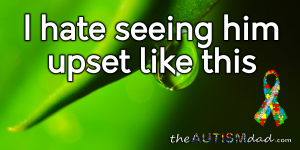