I wasn’t doing so well this morning

All in all, it’s been a pretty good evening. I made a decent dinner and since Elliott and Emmett were still at my parents, I only had to cook one time instead of multiple times. Not only that, but everyone left in the house ate it. ☺

This almost never happens but I’m grateful when it does.

I grilled some chicken breast and baked a couple sweet potatoes, along with steaming some green beans. It was pretty darn good if I do say so myself. 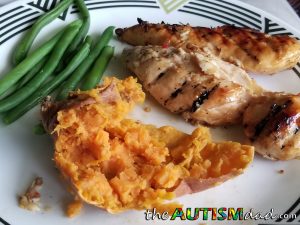 The one problem we did have occurred after the boys came home, and that was bedtime.

Emmett flat out refused to go to sleep because he’s afraid of having another nightmare. It took quite a bit of effort and patience to get him down for the night but Lizze did a great job of finally getting him to sleep.

I don’t know if he’ll sleep through the night but we’ll deal with whatever we must.

It’s been a really long day and I’m ready to retire for the evening. I don’t think we have much going on in the morning, aside from school and Gavin’s infusion.

Walking isn’t looking so good cause it’s supposed to be storming. I’ve made it out three times this week and that’s not too bad. If I can’t go, I can’t go. It won’t be the end of the world.

I hope you all have a great night.

That chicken looks delicious, what did you marinate it in?

I agree. Rob can come cook at my house anytime!

I found out recently that my knees are totally wrecked with osteoarthritis. So I’m glad you can walk and three times is better than none!

Becky, I’m really sorry to hear about the arthritis.. That can’t be easy..