The Lighter Side of #Autism: This is how we watch TV in The Autism Dad house


While it shouldn’t be any state secret that special needs parenting can be extremely challenging, it can also be very entertaining as well.

One of the things I love most about each of my kids is the way their mind works. I just love it because quite often, you can just see the gears turning as they are contemplating whatever it is they’re focused on in that moment.

This evening, Emmett kept going up and down the stairs. Everything he came back down, he would tell me that Blue, his cat is still in the same place he’s been for awhile. 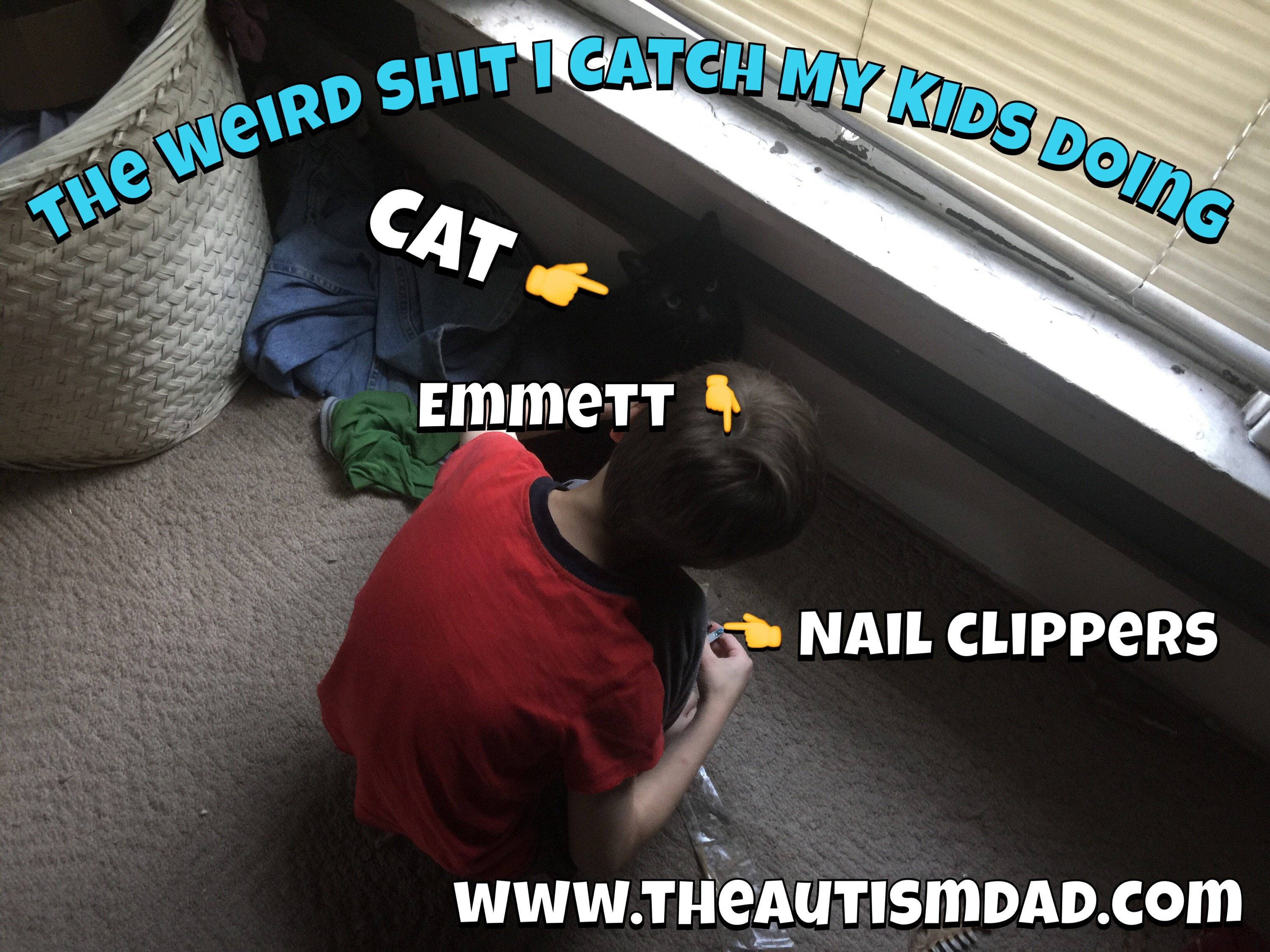 At first I just told him that cats don’t always move around a lot during the day but throughout the evening, he was very persistent about Blue not moving out of that spot.

I kept telling him that Blue was fine, until I remember this is my life and maybe there’s something wrong with Blue. I went upstairs to see what Emmett was doing and check on Blue.

What I found was Emmett hunched over his jet black cat.

I wasn’t sure what to expect but I approached Emmett. I saw Blue pick his head up, look at me and then go right back to whatever it was they were doing.

When I asked Emmett what he was doing, in his most nonchalant voice, he simply said, Daddy, I trimming Blues nails.

So like a million thoughts went through my head. He’s never trimmed the cats nails before. In fact, we haven’t been able to pin the cats down long enough to trim their nails since the boy’s Mother left last year. That was something only she was able to do.

This was not even on the radar of this things I thought I would ever catch him doing and easily qualifies as some of the weirdest shit I’ve ever caught my kids doing.

Let me rephrase that.

This was amongst the weirdest shit I’ve caught any of my kids not named Gavin doing. That’s more accurate cause Gavin’s pretty much set the bar for weird shit any of my kids have been caught doing.. lol

It should be noted that I informed Emmett that he shouldn’t do that on his own. With that said, he did a perfect job and Blue enjoys walking on the carpet much more now. 😀

Haha. we should do an awkward autism moment calendar.

I don’t know but it should be. lol

Why this isn’t “normal?” lol

Great. Am sure I have a load now I think about it.

Seriously let’s do that. A relative has just posted a family picture of us from 2005. My daughter appear to be wrapped in parcel ribbon. And we look as if there is nothing strange going on.

That is such a brilliant caption. I may have to start my own album

Blue’s nails were so long he was having a hard time walking on the carpet?  That shouldn’t happen.  Blue should have some sort of scratching post where he can shed his nail sheaths.  If not, they will curve and grow into the pads of his feet.
Please make sure Blue has someplace to scratch.

That reminds me of when I was out to breakfast with my middle son. He’s was very young and when the server asked him what he wanted, with a straight face, he said cat poop. lol
Great story. Thanks for sharing. 🙂

my son hid my keys before he left for school. i could not find my keys at all had to call in sick tore the house up litterally. he came home from school i said do you know where my keys are i missed work yah mom i put them in the cat poop box. i said why are my key there he said i wanted to give the cat something to dig with. i wasnt sure wither to laugh or cry