We’ve begun our back to school rehearsals


Gavin is such a good kid and he’s come such a long way over the last year. Lately however, I’ve been seeing quite a few steps backwards and it’s got me a little bit worried.

It’s really kinda bizarre because as he’s slipping, as I have affectionately dubbed it, some old behavioral issues are resurfacing once again. I fear before too long, I’m going to be seeing full fledged meltdowns/tantrums again but that’s for another post at another time.

For the last few weeks, I’ve been trying to get Gavin to stop pointing with his middle finger.

If you didn’t know him, he would honestly appear to be telling you silently, to fuck off. That’s not what he’s doing but I can think of a million situations this could get him in trouble..

He used to do with when he was little and it took forever to break him of this. Break him of this sounds harsh but I can’t very well let him go around pointing his middle finger at everyone.

There are neuromuscular issues at play here as well because his movements are becoming more ridged and lacking any level of finesse in both the fine and gross motor department. 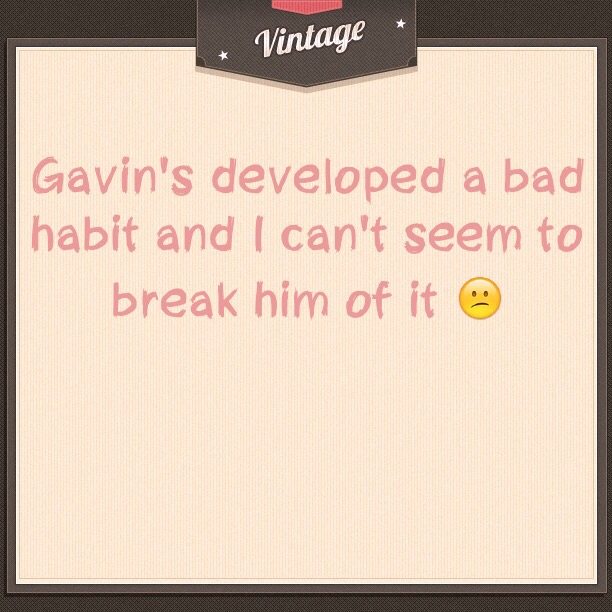 The point is that he doesn’t mean anything by it but the world doesn’t know that and something you learn very quickly as a special needs parent, is that the world is not a forgiving place kids like Gavin.

I’m not really sure what to do about this.

When I remind him that he’s using his middle finger, he hits himself in the head and is very clearly frustrated with himself.

For the record, I’m not mad at him at all. I just don’t want this to cause issues for him… 😕
It’s always something isn’t it…

Reaally common for kids with coordination issues to do this.
I know you tend to be consistent in the language you use with Gavin, maybe try changing it up so it’s less triggering for him. For example if you’re “Gavin, you’re using your middle finger buddy” – that becomes the prompt for him to hit himself in the head and feel frustrated… I’d try something that doesn’t use the words “middle finger” like “”pointer” or “other finger”… see if that changes his reaction. Also make sure he’s using his index finger appropriately at other times – like on his tablet and when using cutlery – anything where that finger is extended.

Just a thought, but could he know it ‘gets your goat’ to do this? Gavin has come a very long way, and it could be he is being a teenager. Kids do some strange things…. if it truly is a matter of slipping back, before school or when he is at home, tie a string (or if you have one get a ring) to remind him thats not a pointing finger. If you have a ring or something acceptable looking he could wear it . I am hoping to hear he gets to attend school this year, he really has change a whole lot for the good.