It’s been a really awesome morning so far

Dedicated to anyone who’s living with a broken heart

The biggest issue is always his shoes and socks.

I’ve tried every pair of socks I have for him and nothing feels right anymore.  His shoes aren’t tight enough and it all culminates into a sensory related meltdown.

This happens every single time he has to wear shoes, which is at least once a day during the school week.

He will wear flip flops in the warmer weather but it’s getting too cold now so this struggle is about to get a whole lot more challenging.

It’s things like this that people don’t see, in regards to the challenges associated with raising a child with Autism.  These are sorta behind the scenes type stuff but I assure you that it gravely impacts everyone’s day.

Yesterday was a really tough day for Emmett sensory wise.

I was really hoping that PT would help him to sorta ground himself but we almost didn’t make it because he was struggling so much with shoes and socks.

He was so upset I was going to just cancel but after 45 minutes or so, I was able to get his shoes and socks on in a way that he was okay with.

He did really well in therapy until it was time to put them back on.

I so totally love his OT and PT because they both took a large chunk of time after his session was over, to help him work through it.

People ask why I don't show faces of people besides my kids. It's simply out of respect for their privacy. My kids love seeing their pictures here but I like to keep 3rd party identities private unless told otherwise. 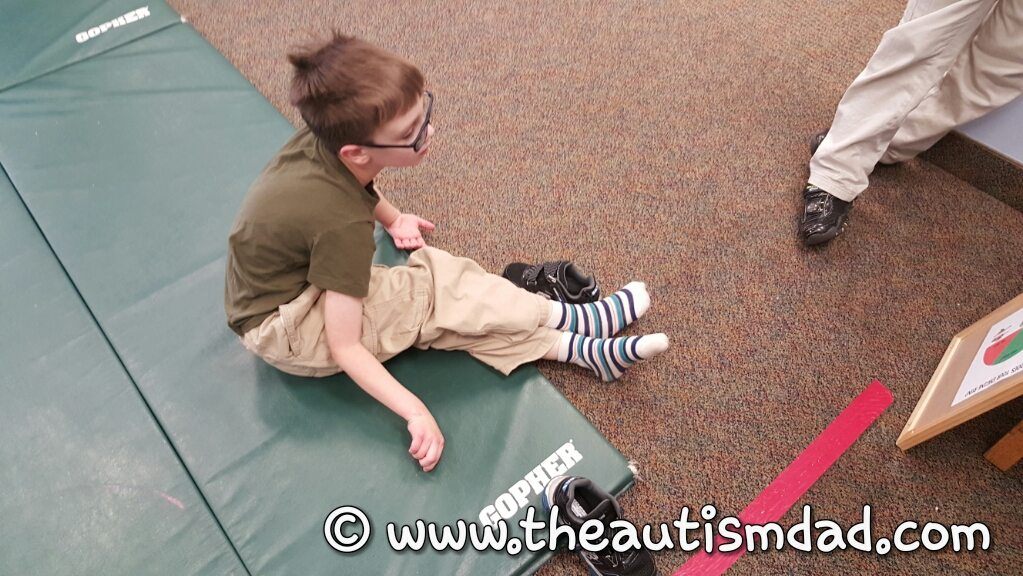 It never really got resolved but I was able to get him out to the car.

Unfortunately, we had a couple of errands to run afterwards and that ended up requiring a great deal of patience because I had to help him with his shoes throughout the trip.

It was an exhaustive afternoon but we made it through.

When I spend a large chunk of that first thing in the morning, I’m paying for it the rest of the day….