It was an amazingly awesome, challenging, overwhelming and meltdown filled Christmas

MELTDOWNS: The reason I handle the holidays differently than most

It’s been a much better day today

It was an amazingly awesome, challenging, overwhelming and meltdown filled Christmas


I’m going to try and get you all caught up on how everything went for the boys and I this Christmas.

As the title states, it was an amazingly awesome, challenging, overwhelming and meltdown filled Christmas.  That’s the long and short of it. 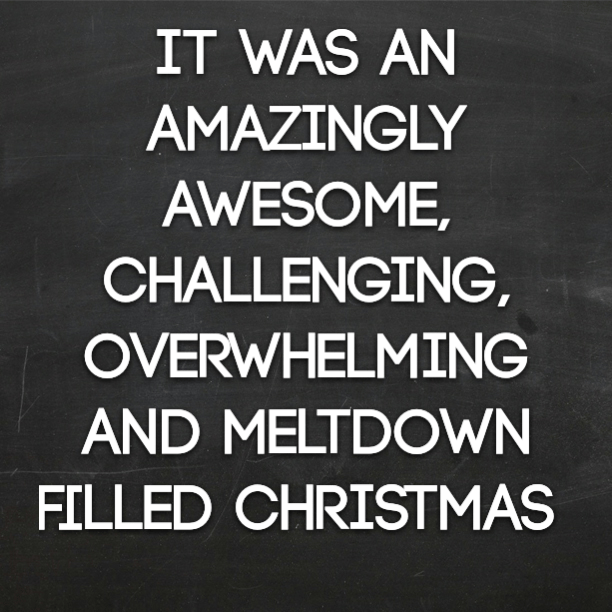 I opted to celebrate Christmas on the 24th, after the boys came home from their Mom’s and Grandparents.  I did this for a reason and while not everyone was happy with my approach this year, the boys were and that’s what matters.

My logic was that they were already amped up from the visit, which was a good one but ended earlier than it was supposed to.

There was zero chance of them ever going to bed and if they eventually did, I would end up seeing the ass crack of dawn.

The only way to end the madness and overstimulation that is Christmas, is to open presents after Santa comes.  Well, this year, Santa decided that since he had to stop by their Mom’s house to deliver presents early, he would swing through here as well.

The boys were happy with it and once their presents were open, they could begin the long process of grounding themselves again.

It actually worked out well because Emmett got his dream present and that was the Rhino Nerf Blaster.  Unfortunately, it was DOA and needed to be exchanged.

We went out into the Christmas Eve madness and exchanged it, only to come home and find out that it didn’t work either.

I did some research and if I had checked the reviews, rather than just try to make Emmett happy, I would have never gotten it.  Apparently, very few actually work and the ones that do, only will for a short time.

We made a second trip back to the store with a very angry and frustrated Emmett and an Elliott who didn’t want to be there.  Gavin was happy wherever we went (God love him).

After Emmett politely lectured the lady at Toys R Us, saying that they should stop selling this Nerf gun because it’s breaking kids hearts, we took the store credit and let Emmett pick something else out.

Emmett ended up using his Christmas money to buy himself an indoor radio controlled helicopter and a micro-drone. He even bought a micro-drone for Elliott and Gavin as well.

Everyone’s happy and I was really proud and a little jealous cause those micro-drones are pretty awesome.  ☺

I wanted to keep Christmas day as low key as possible. We had breakfast with my parents and siblings before returning home.

The day sorta went downhill from there and the meltdowns hit with full force.

I made the mistake of trying to take the boys to movie to try and break up the mood and hit the reset button but that ended with only seeing 20 minutes of the movie and returning home.

When we got home, things were pretty tense because not everyone wanted to leave the movie.  A few little squabbles took places but they moved on relatively quickly.

I had to get Gavin’s IVIG infusion started while trying to get the E’s to settle down for the night.

I put myself in timeout a couple of times because I was nearing what I thought was my limit.  It helped a bit and I would recommend that to everyone.

Bedtime actually went pretty well.  The boys crashed and have been sleeping since about 8pm.

I spent my evening watching a movie and getting caught up on my lengthy backlog of reviews for the Amazon review program I’m involved with. Now I’m current, at least until Sunday when the next shipment of cool free stuff arrives.  ☺

As we enter the weekend, I’m really praying for a nice quiet day.

I hope you all had a great day.  I pray that the fallout that most Autism families will soon experience, if not already, is quick and painless for all involved.  ☺