How my 7 year old with #Autism broke my heart

The boys had a really good day at school today. I’m totally feeling like a pretty awesome Dad because it was picture day and remembered to have them wear something other than their uniform. ☺

Elliott’s been in a mood because I made him do his homework as soon as he got home.  It’s outside of his routine but he wasn’t able to do his homework last night and I wanted to make sure it got done tonight.

Both he and Emmett have been arguing/fighting this evening and the tension in the house is a bit high.  Gavin’s hiding in his room and I’m taking a break in mine as well.

Part of the problem is that I don’t always give them their afternoon does of Adderall.  It’s not that I forget, it’s actually a conscious choice and I have good reason for it. 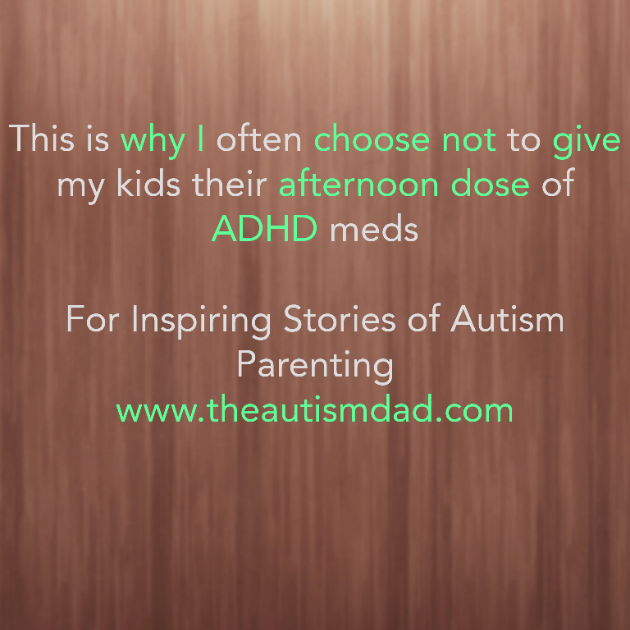 For starters, I’ve cleared it with their doctor and it’s not a problem at all.  Adderall isn’t like an antidepressant or something similar, in the sense that it doesn’t need to be constantly maintained in the bloodstream.  It’s fast acting and only works when it’s taken.  Skipping the afternoon dose has zero impact on its effectiveness when the next dose is taken.

The reason I avoid the afternoon dose is because while they will be more focused and less hyperactive/impulsive, they also will not eat.

It makes kids that are difficult to feed when they are hungry on a good day and makes them not hungry until late at night and when it’s much harder to figure anything out.

On the flipside of things, when they miss their afternoon dose, there are very often ADHD related behavioral issues to contend with.  It’s not always an easy decision but I put what I feel is better for their physical health, ahead of easier to manage behaviors.

Anyway, this is part of the reason the boys can sometimes struggle after school.

At the moment, they’re playing nicely together and I’m just sorta hovering around the corner, in the event I need to intervene..

I’m hoping this ceasefire will last until bedtime because it’s so nice to see them getting along and enjoying each other’s company.