How my 7 year old with #Autism broke my heart -

Autism Parenting: A positive ending to an otherwise challenging day

How my 7 year old with #Autism broke my heart

Emmett’s a truly amazing kid.  He’s always surprising me with the things he says and does.  Sometimes those surprises are hilarious or just plain impressive.  Other times the surprises come in the form of heartbreaking insight into how he’s feeling.

Something you need to understand about Emmett is that he really struggles with expressive language. 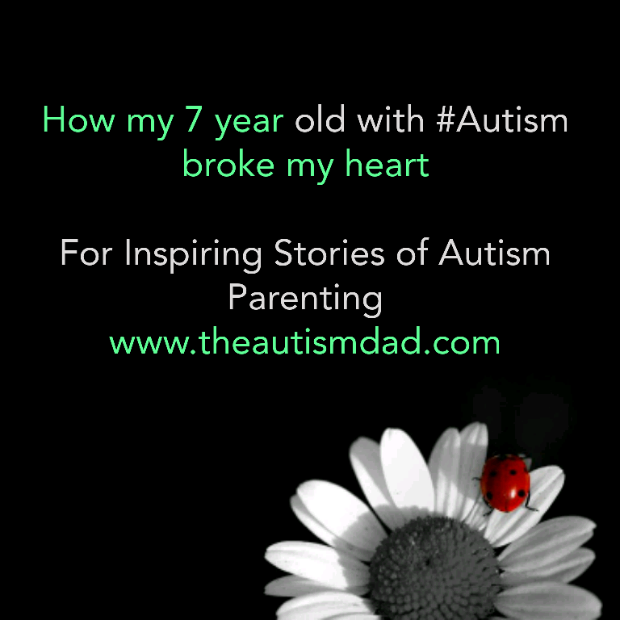 Sharing how he’s feeling, especially on an emotional level, is just not something that happens very often.  When it does happen, it’s usually because he accidentally says something.

He’s more likely to tell you something he thinks you want to hear.

Thursday morning I was driving the boys to school and Emmett started listening to music on his tablet.  He loves to sing along but won’t if he thinks someone is listening in.

Emmett played the song Say Something by A Great Big World.  If you’ve never heard it, frankly I’m surprised but you can check out the video at the end of the post.  When you watch it, you’ll gain way more insight into why this broke my heart.

I heard the song come on his tablet and as the song went on, I heard his voice along with it.  I was able to record him singing this song and to my complete surprise, he looked right at the camera and continued singing.

The reason I recorded it was because on Tuesday, Dr. Pattie and I were talking about the boys and their music.  She said that she wanted to start asking the boys to find a song that helps them describe how they’re feeling and I wanted her to see this.

Listening Emmett pouring his little heart into singing this song broke my heart on so many levels.  If you know the meaning of what the song, you’ll understand why.

Emmett’s been through so much in the last year and a half.

He’s been the strong one and is far more worried about how everyone else feels, rather than how he feels.

I had no idea when we left for school, I would get a glimpse of what he’s feeling.  I’m heartbroken but I’m also so proud of him for finding a way to connect to his feelings and share it in such a beautiful way…

When he finished singing, I asked him what the song meant to him and he very quietly said a lot.. I just wanted to scoop him up and give him a giant hug but I felt like he was letting me in and I didn’t want to screw it up.

Emmett, if you ever read this, I want you to know that get it and I’m right there with you.  ❤