The good news is I slept like the dead. Bad news is……..


For the past two or three nights, I’ve been lucky to get an hour or two of sleep.  I can’t seem to shut my brain off and aside from Emmett helping to keep me awake at times, I just can’t relax enough to let go and fall asleep.

I’ve been experiencing this internal war for the last year and a half.  I’m trying to reconcile my life because I feel like I’ve somehow lost myself.

For 15 years, my identity was wrapped up in my family.  Being a husband and father is all I know.  Having to give up being a husband is something that has caused me to lose a sense of who I am.  I feel like I’ve lost my identity and my sense of purpose.

Who am I now? I know I’m a father but is that all? I feel like there used to be more to me. 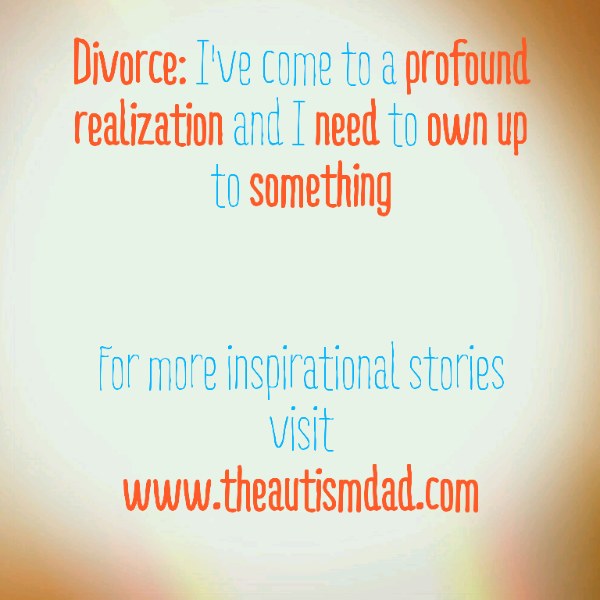 I’ve had a rather profound revelation and I think know why I’m struggling so much right now and to be honest, I don’t think it has anything to do with being on the wrong medication (although Wellbutrine was not a good medication for me). It has to do with both acceptance and denial.

For the last year and a half, I’ve been desperately trying do right by everyone but myself.

I’ve been trying so hard to just move on and unfeel everything I’ve felt since early 2001.

The truth is, I just just can’t.

I’ve been trying to convince myself that after everything that’s happened, both things that are public knowledge and some that are not, I shouldn’t love my wife anymore.  What does it say about me, if I love someone that could do the things that were done to both myself and the kids?

I’ve been denying my feelings and trying to force myself to see things in a way that just doesn’t come natural to me.

It’s truly amazing how many people have been hurt or negatively impacted by her actions.

There’s both myself and the kids but my family lost their daughter, sister, Aunt, cousin and whatever my wife was to my grandparents (granddaughter maybe?)…

It was easier for everyone if I just didn’t feel anything anymore. It was best for my kids know I was just happy that they got to see their Mom. They don’t need to know how desperately I wished I could go as well, just so I could be in the same room as her.

Forcing myself to be someone who doesn’t feel these things was killing me.  I couldn’t sleep and frankly, I’m not sure how tonight will go because I’m writing this as I’m finally allowing myself to feel for the first time in a very long time.

So here it is…

I still love my wife.  There isn’t a day that goes by that I’m not reminded of something that I miss about her.  It hurts to know that she’s long since moved on and I have lost all meaning to her.  It hurts because there a many people out there who I cared about or were part of my life for 15 years, that have no idea what actually happened and just believe what they’re told. It hurts to lose all those people and not one person ever ask if I’m okay or if the kids are okay.

Through all of this, I still love my wife.  I still love and care about all those people who have simply written me off without a thought.

I realize that publicly admitting this makes me vulnerable in countless ways, some ways I’m sure I’ll pay for but the alternative is just something I can’t do anymore.

I’m no longer ashamed of feeling because I can’t help how I feel, anymore than I can control needing to breath or eat or sleep.  It’s who I am and it’s who I’ve always been.

This is such a convoluted mess because while I very much feel everything I’ve just admitted to, I’ve very painfully learned how absolutely necessary it is to end my marriage and move on with my life.  I’ve learned that the person I married and everything I miss, no longer exists.

While it’s really hard to reconcile that with who and what exists today, it’s something that I will figure out as I go. Until then, I’m not going to deny or hide from my feelings any longer because it’s a lie and it’s soul crushing.

Time has a way of healing even the deepest of wounds.  It’s one of those things though that has no clearly defined finshline.  I’ll get there when I get there.  I’ll move on in my own time and maybe someday, I’ll find someone who will see this single Dad as a person worth building a life with.  Maybe someday, I’ll be able to truly have what I thought I had all along.  I do have hope and I’m very open to that.  ☺

Please do me a favor.  I know not everyone will agree with me on this but it’s my truth and I simply ask that you respect that.. This wasn’t easy to talk about and I know that I love someone who no longer exists or maybe never existed. I also know I miss things that in hindsight, I probably never really had in the first place.

The thing is, it was real to me.

I feel remarkably more at peace, having come clean and I need a little peace in my life.  Maybe it’s is even normal to go through this? Who the hell knows…. Either way, I feel like this was a big step in the right direction and I don’t feel so weighed down anymore.

There will be difficult times ahead but I’m going to really work on being true to myself because I’m learning just how important that is…. ☺