Not to be too cliché but when it rains it pours really seems to fit here.

I received a double whammy yesterday and frankly, with the three shootings we had across the street in the last 24 hours, I sorta forgot about this.

Monday, I received a second letter from Social Security, this time in regards to Gavin..

Just like the first one in regards to Emmett, they claim that they over paid on Gavin back in January and I need to repay them by June or they will deduct roughly $100/month until paid off.

The amount in question is a few hundred dollars I believe.  I say I believe because as soon as I read it, I got sick to my stomach and frankly, I don’t have the letter in front of me.  I do know that it would take a few months to pay back if they auto deduct it. 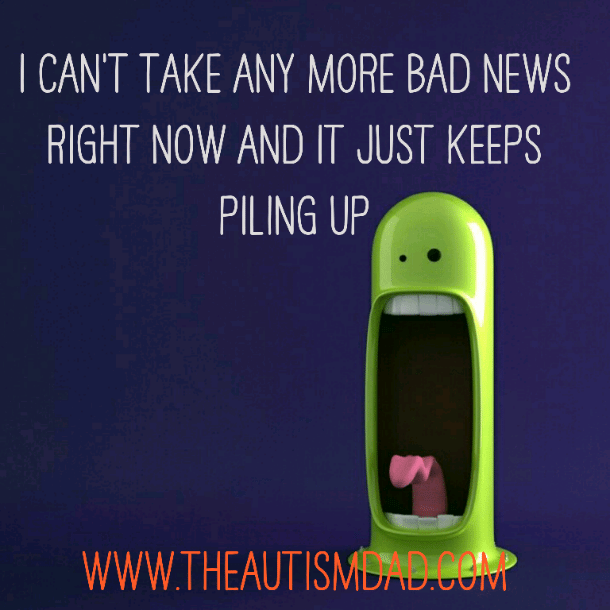 This is really frustrating because Gavin’s been on SSI for almost a decade now and he received the exact amount he was supposed to in January, every month before that as well as the months that followed.

The letter stated he’s supposed to receive $733/month and it will return to that once I repay the over payment.  I checked and in January he received $733 just like he was supposed to.

Between him and Emmett, I’m now repaying roughly $200 a month for the next few months.

I need to call them tomorrow because Emmett received exactly what I was told he was supposed to receive and I don’t know where these over payments are coming from.

Unfortunately, this repayment will take me through the summer, while the boys are home all day and when expenses will be increasing as a result.

All I can do is follow up with this and find out what the hell is going on.

Shortly after receiving that letter (like 45 minutes later), I got a phone call from State Farm insurance, the carrier of my homeowners policy.  My agent was informing me that I have until August to repair or replace my front steps, leading up to the porch or my policy will be dropped.

These are prefab concrete stairs.  At the very least, I would need a forklift just to move them.

Do they need replaced? Yes.. The main issue they have is that they aren’t level.  They aren’t level because the side walk sunk on the left side and now they lean.  It’s not a safety issue, at least not in reality.  State Farm however, sees it very differently.

My agent is going to stop by and take a look this week.  He’s really cool and wants to see what we can figure out.

Unfortunately, anything that needs to happen is going to be expensive and I realize expensive is a relative term but if it’s something I can’t financially cover, it’s expensive in my book.

The bottom line here is that I have to make what amounts to a relatively major repair to the front of the house, which costs money, at the exact same time that SSI is going to reclaim what they say they overpaid and our drastically reduced monthly food budget will be in its second month.

Truthfully, I didn’t know what I was going to do before all this other crap…

I haven’t even begun to figure out how to overcome this mountainous obstacle.

All I know at this point is I need to follow up with SSI in the morning and get this figured out.  I suppose I could see them making a mistake on Emmett’s initial payment but Gavin’s been the same, aside from cost of living increases, for the last 10 year’s……

I’m feeling frustrated, overwhelmed and a bit disheartened…..but I have to push through it….