#Autism Parenting: I know this will sound weird but I don’t know how else to describe it

Tonight we need your thoughts and prayers

#Autism Parenting: I know this will sound weird but I don’t know how else to describe it


Years ago, before all this redefining of parental roles took place, my wife used to have this saying.  On days where Emmett would seem to struggle more, she would refer to them as a more Autistic day.

What that meant was that there were days where Emmett’s Autism was much more obvious.

I’d forgotten about that saying until recently.  What sparked that memory is the fact that I’m seeing a trend in Emmett where he’s displaying more classical symptoms of Autism.  Some of these symptoms make sense and others have me stumped.

Emmett’s doing a great deal more stemming than what I would say is typical for him. 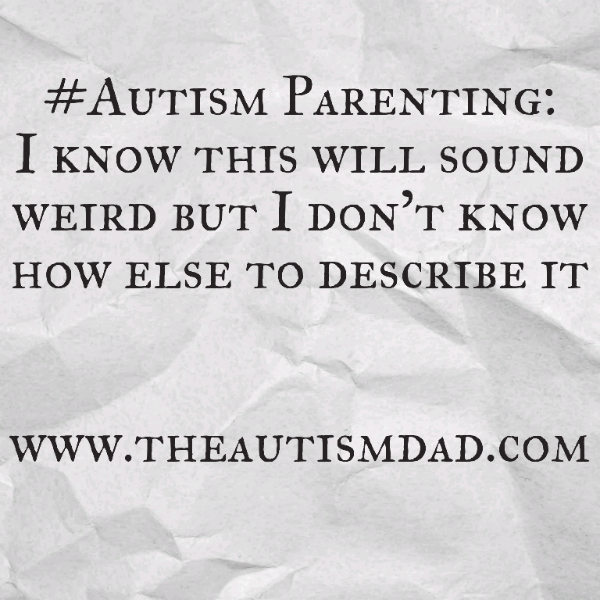 For those tardy to the party, stemming is a way of self-soothing.  Things like rocking back and forth, flapping of hands or some other kind of repetitive action.  I would imagine that everyone’s different but I think that covers the more common ones.

In Emmett’s case, I’m seeing or rather hearing a lot of hand clapping but he only claps his hands in a certain pattern.  If he’s not clapping his hands, he’s making a tick tock noise with his tongue, in a similar pattern.

This could also be an OCD thing as well but it feels more like stemming.

The weirdest thing I that I see now is that he has to sleep in his clothes…  WTF right? I mean, this is the kid that normally prefers to streak around the house in his underpants. This totally blows my mind because sensory wise, this should be something that he can’t stand….

If I had to guess where this was all coming from, I’d say that it’s helping him cope with all the stress in his life, of which there is much.

Anyway, Emmett has been experiencing more of what we’ve traditionally called Autistic days.. It does make things a bit more challenging but he’s totally worth it.

For the record, that’s not meant to be taken in a negative way.  It was a way we were able to describe behavioral changed to his therapist when he was little and it still seems to be the best way to describe this same behavior today.