Autism, Anxiety and ADHD are killing me today


The weirdest thing happened today.  The boys and I made a quick run to the grocery store, in order to pick up a few things.  One of the important things was a gallon of milk.  Gavin has milk in his cereal every single morning and we were out.

We got what we needed and I rang everything out, including the milk.

Gavin usually carries the groceries into the house and we put everything away.  He does really good with that and it helps me to keep an eye in the other two.  Today was no exception and everything was going smoothly.

That gallon of milk that we rang out, paid for and packed back into the cart,  never made it into the fridge.  That’s right..  It disappeared somewhere between unloading the cart into the trunk, heading home and bringing the groceries into the house..

It’s just gone and no one has a clue as to what happened to it.

Everyone remembers it being in the cart on the way out to put the groceries in the car but beyond that, I haven’t a clue.

I know I didn’t leave it in the cart because the the cart had to be empty in order to combine it with the other carts in the little cart collector thing in the parking lot.

There was zero chance I was going to take the boys out to the store again for a gallon of milk.  Tempting fate again on that one would be like playing Russian Roulette with a bullet in each chamber  I was lucky and grateful to have made it through the first trip, I knew a second would not be a good idea.

I have several theories as to what happened to our gallon of skim milk.  They involve things like aliens, invisible portals to another dimension, spontaneous combustion, The Matrix and false or implanted memories.

The best theory I have is that the gallon of Milk was taken as tribute by the My Kids Actually Behaved in The Grocery Store God’s.  Shit, if I’d known that was going to be the cost of doing business, I would have picked up an extra gallon.

I’m sure you can see why I didn’t want to go back for round two.  The first time cost Gavin his cereal in the morning.. Who the Hell knows what the price would be this time? I for one wasn’t prepared to find out.  😉 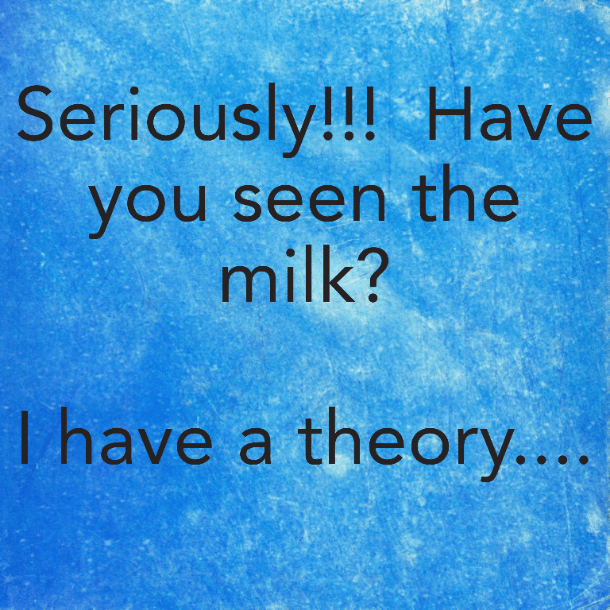