Screams of terror were heard all through the house -

On a lighter note…..

Pictures from our #Autism family adventure

Screams of terror were heard all through the house


Just as I was brushing my teeth last night, getting ready to go to sleep, Emmett woke up in a panic. I was in the bathroom and out of habit, I closed the door behind me.

Emmett ran into my room and saw that I was gone. He ran downstairs, thinking I was sleeping in the couch or something. When he didn’t find me there, he just began screaming at the top of his lungs. It was a scream that immediately conveyed terror.

When I opened the bathroom door to go get him, he was standing right there. It sorta freaked me out a bit because I didn’t hear him come back up the stairs.

He was standing there, sorta swaying back and forth, like he was trying to keep his balance.

He wrapped his tiny arms around my waste and barely got out the words, I had a nightmare.

I tried getting him back in his bed but he was terrified of going back. If he climbed into bed with Lizze and I, he’d wrap himself around me and I’d never sleep. If I left him in my bed, while I moved to the couch, he panicked and followed. I know this because that’s exactly what I tried to do.

We ended up going to the coaches, to finish out the night.

On the plus side, I took the opportunity to reintroduce a shirt to him while he wasn’t totally with it. Maybe that seems like a cheap shot but we were going on day three and I was hoping that doing it this way would help him the next day.

It worked and he’s still wearing the shirt. 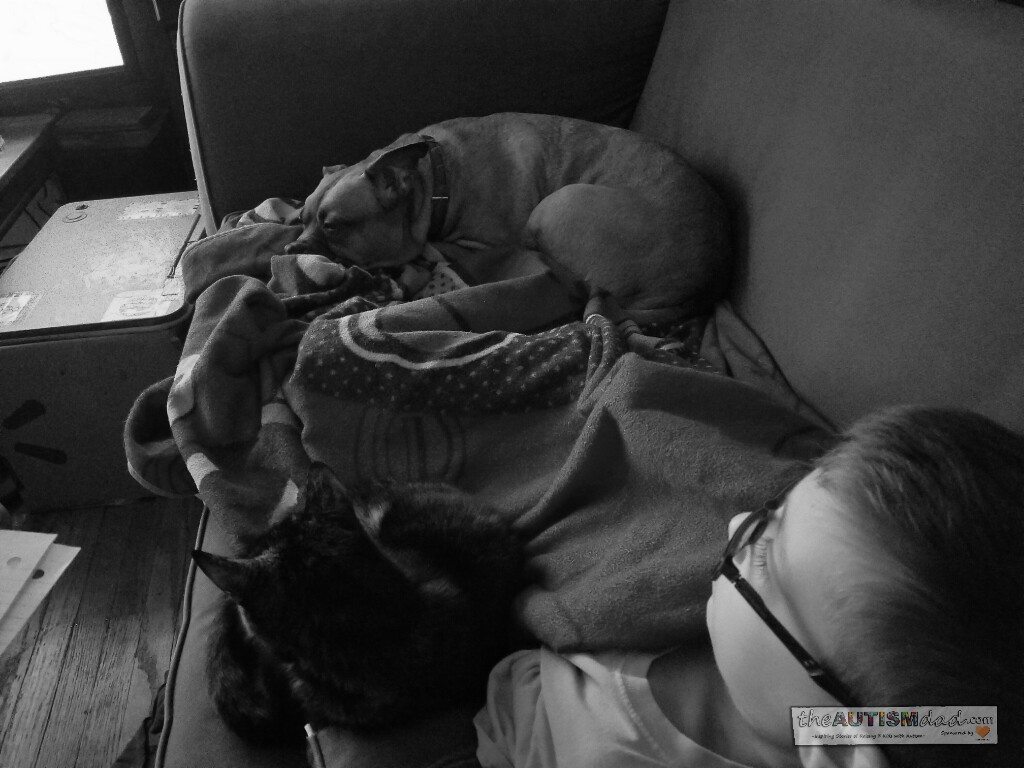 I don’t know what will happen if he takes it off and tries to put another one back in, but we aren’t there just yet.

Apparently it was obvious how stressed out Emmett was last night because both Cleo and Maggie slept with him on the couch. Neither one of them moved all night. That helped Emmett feel better but he never did fall back asleep.

I dozed off for a little while, because he was watching cartoons and was occupied. The alarm was on, so he wasn’t going anywhere. The kitchen light was off, and he can’t reach it to turn it back on. This means he won’t dare go into the kitchen until at least sunrise.

It turned out to be a really long night and I’m feeling like I could sleep for a year. Unfortunately, Lizze isn’t doing so well today (Fibromyalgia related), and so I need to keep myself moving for now.

As tired as I am, I’m also feeling optimistic about the day. I might take the boys for a hike today, and enjoy the weather, while getting some exercise. ☺