What do you do when not everyone in the class is invited? -

Another long and trying day

What do you do when not everyone in the class is invited?

Emmett came home from school today in a really good mood. This was a pleasant surprise because he had to go to school without Elliott and doesn’t always do okay with that.

When Emmett climbed into the car after existing the school, he said Dad, I need you to interpret something for me. 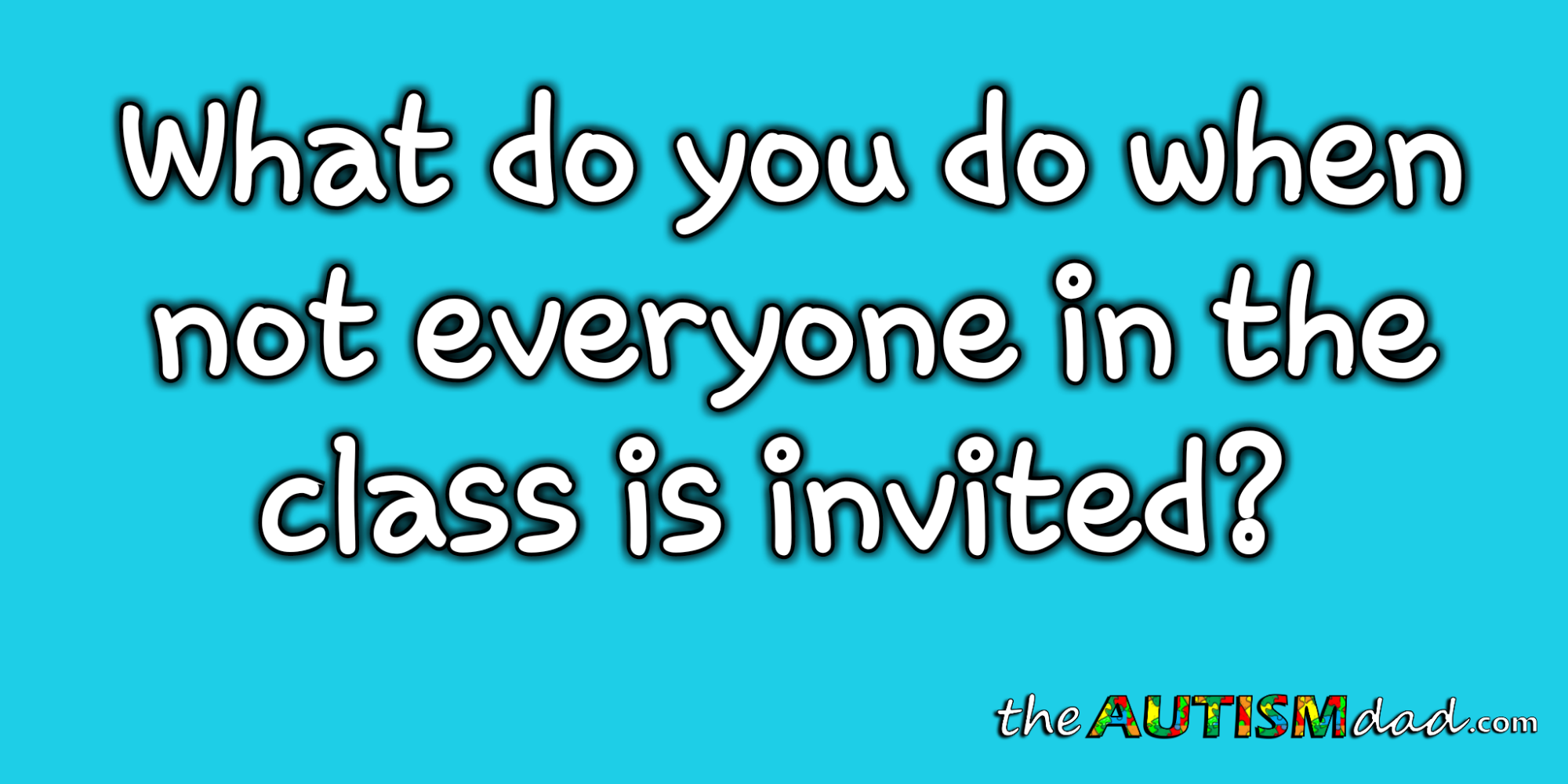 Emmett will sometimes do this when he doesn’t understand an interaction he’s had with someone. Social cues aren’t always his thing, much the same as many others on the Autism spectrum.

Turns out the issue was pretty simple.

Someone in his class is having a birthday party and Emmett got an invitation. He was clearly excited but also troubled at the same time.

Emmett says he doesn’t think everyone in the class was invited. He overheard his teacher say something about invitations not being given to everyone.

I tried talking to him about how he felt about some people being left out. That’s not necessarily something that Emmett would be able to express.

I asked him how he thinks the kids who didn’t get invited would feel? He wasn’t sure how to answer that because he’s very logical and doesn’t know how they would feel because he’s not them.

Listen to what Emmet said: “It would depend on who was having the party” – he’s not a little little one anymore, and the requirement for “everyone in the class” really doesn’t need to exist anymore. He’s closer to some kids than others. Everyone has different friends, and it’s ok to acknowledge that. You have to be friendly with people when you’re in the same classroom, you have to be kind and nice and welcoming when you are randomly (or not-so-randomly) assigned to be in the same space, but you don’t have to elect to spend time outside of that space with everyone.

That’s a solid point but this is a classroom of special needs kids.. It just seems like something like this, if everyone isn’t invited, could be done in a more private manner. Perhaps I’m overreacting. I’m not actually reacting at all but rather seeing how other parents feel about this kinda thing.

Wait, was it not done in a private manner? Emmett only knows that not all were invited because he heard the teachers talking about it. And I see your point about them being special needs but there are still issues that could make a party for the whole class a bad idea. Finances would be a big one but also can you imagine for a minute having 15 special needs kids in your house for a party? The overstimulation? To take Emmett’s mind off of the invitation part of it, start planning what gift he wants to take to his friend for his birthday. Go shopping together so that he can pick out just the right thing for their special day.

I totally agree with you and I didn’t go into more detail because I wasn’t sure. I didn’t want to be inaccurate but according to Emmett, it was not a done in a private manner and feelings were hurt.

I’m not sure of the accuracy of that but it sounds like he overheard a teacher explaining to one of the kids that not everyone was invited.

If that’s what happened, it just seems like a really shitty thing to do. I’m not saying the intent behind it was malicious and you may be right about the reasoning behind not inviting everyone.

This is why I wanted to check into this. That’s all.

It should probably be a policy that if kids are going to be excluded from somethibg like this, teachers could privately stick the invites in take home folders or something. I just seems mean to publicly exclude kids, regardless of the motives.

I was just asking for thoughts…

The teachable moment here comes with
continuing discussions with Emmett about empathy, perspective taking, friendship, etc. as these social situations arise. Sounds like the conversation you had was a good start.

I don’t think the teachable moment comes by having him not attend the party. Not sure exactly what that would achieve for him or what lesson would be learned. He’d also be passing up a rare opportunity to socialize with his peers outside of school.

FWIW, my kids’ school policy is that if not everyone in the class is invited, invitations can’t be given out at school. But as the kids get older (and if they’re still having birthday parties) they begin to learn that just because someone is in your class doesn’t mean that they are necessarily your “friend.” Good conversation to have about the differences between friends and acquaintances. My kids love when I tell stories about how there are actually some people at work that I don’t like, but that I still have to be respectful etc.

I agree Jimmy. I don’t think we were going to keep Emmett from going. I just wondered what other parents felt about this..

Well I agree that if the invitations were handed out in a public way, it’s not the right thing to do. But it’s not the worst thing in the world because that’s a real life social situation that can be learned from, whether Emmett had been invited or not.

If Emmett was a bit younger I might make some inquiries at the school about their policies and what happened. But I think at his age it’s a great time to start learning these life lessons and having conversations about these things.

Definitely overthinking it. There are lots of lessons that can be learned here. They are getting to the age that you can’t, and shouldn’t, fix everything for them going to the school about this is one of those things. Another is that he shouldn’t be listening to the teachers talk, this could be unavoidable, but sometimes it is best to not listen in and remove yourself. And the most important lesson, is sometimes life isn’t fair for everyone and fair is subjective. He should be go to the party for sure. Hope that doesn’t sound preachy

Solid point as well. I wasn’t thinking of complaining to the school. I was simply going to inquire what the teachers knew about it. That way I could answer Emmett’s questions. That seems reasonable to me.

You are absolutely overthinking it. There’s no reason at all why Emmett shouldn’t be able to go to this party. There are a million different reasons why the entire class may not have been invited and they aren’t all bad. I know you don’t have much experience with ithem but kids’ birthday parties can be expensive and a nightmare to plan and pull off and many (if not most) parents will only allow X number of kids to be invited, especially as they get older. My thought would be that you don’t look this gift horse in the mouth and let Emmett go to the first birthday party I can remember any of your boys going to.

This isn’t his first birthday party and as I’ve said in other replys, I’m not really meaning to react to this. Emmett asked questions that I couldn’t answer without knowing more. Perhaps I wasn’t as clear as I thought I was in the post. I was tired and wanted to get it published before I fell asleep. ☺

I have had to explain to my nuerotypical and autistic child that it isn’t always possible for every… https://t.co/zQIKX7BKEL

Emmett “hit the nail on the head” with his response of “it would depend on who was having the party.” Just because kids go to school together and are in the same class everyday doesn’t mean that they are friends outside of the classroom. I think Emmett understands it more then you give him credit for.

That’s the only up side for my son and his autism – he wouldn’t notice. He only is concerned about… https://t.co/7zVRUhURrd