I don’t remember much of today


I wasn’t sure if I was going to touch on this part of my life with this new blog but I’m not really sure how I couldn’t.

Everyone has a moment in their life that changes the the course of everything going forward. That moment for me, occurred on the night of October 14, 2014. That’s the night that my wife left and never returned.

I thought that we were the exception to the rule.

It was her second marriage and we were a blended family with special needs children. I suppose the cards were stacked against us but I never saw this coming and there are still times I wake up in the middle of the night thinking it was just a bad dream. 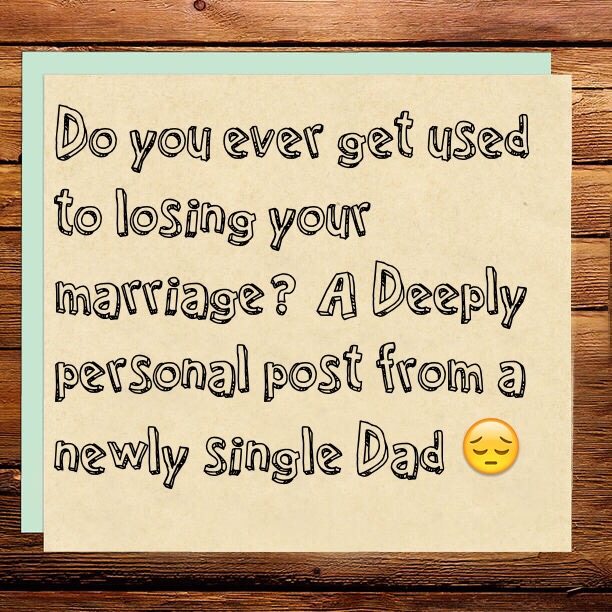 I know guys who’ve gone through divorce or separation and it’s like they’re back in high school, sowing their wild oats.

I guess everyone deals with things differently but that’s never been me.

My wife and kids were the most important thing in the world to me. My kids still are and always will be.

I have to learn to let go of the rest and that’s hard for me to do.

Truthfully, I feel like the woman I was in love with, died and I can’t reconcile that against the fact that I still see her. That’s not meant to be any kind of personal slam either. It’s just the only way I can describe what I’m experiencing.

There are times however, that something triggers a thought and all of a sudden, I’m completely overtaken by this tsunami of memories. I try really hard not to think about these things or remember but it’s also like I just don’t want to forget. I think that’s an oxymoron…

My kids keep me more than busy and most of the time, I really don’t think about it.

At the same time though, 14 years is hard to not remember and so much of this still seems unnatural to me.

Thankfully though, It’s not all bad.

In fact, there are some incredibly positive things that have resulted from all of this. I’ve discovered that I’m a pretty good parent. I’m the definition of imperfect but I’m raising three very challenging kids on my own and I never thought I would find the strength to even make it this far.

Then of course there’s Gavin….Gavin went from someone who was unable to co-exist in the same house with us to someone the boys and I couldn’t exist without.

That’s been such a blessing and I’m so incredibly grateful to have my son back, as are the boys to have their big brother.

Generally speaking, I’m happy. I’ve got a great deal going for me and there’s very real potential for the boys and I to be doing very well at some point in the near future. For now and until my proverbial ship comes in, the boys and Imare struggling in many ways.

I tend to struggle when I see the boys in pain, emotional or physical and this whole thing has traumatized them. They’re hurting in ways that I can’t fix and they will likely carry at least some of this with them for the rest of their lives.

For the last ten months or so, every ounce of energy I have gets poured into helping the boys simply make it through the day. As I succumb to the exhaustion, that’s when I slip into an emotional place where I struggle with my own grief, anger, frustration and heartache.

My goals are practical and realistic. I simply want to make it through the day, with my boys doing a little better than the previous day. I want to help them heal, learn to trust again and move forward with as little permanent scaring as possible. That’s like three full time jobs and the hours are 24/7/365.

Fortunately though, my boys are worth the effort and so am I…

Divorce is just like  a death except you see the ‘ghost’ . When you have children you hope the other person takes an interest,  takes the time to be involved, takes the time to be just  part of what they were for the kids.You hope they do their part, pick up some slack and if you have custody hope they act fairly. All those hope though are out of your hands, since you can force a ghost to do anything.
Ir isnt just kids on the spectrum … all children are affected . Divorce for them is like seeing the same ghost, they are confused, scared and dont know quite what to do for some time.
I hope at some point your ex gets more involved. I dont mince words, and I know she used to be your wife, but the ghost needs to get herself togeth, qquit moaning andd complaining and see she has three kids that are hurting (although it actuaally seems like it is two since Gavin has been thriving) She doesnt have to like you, but she doess have to put her children before her own selfish waants or needs.
In most cases it is the Mother who ends up in your shoes, and the statement off sowing their wiild oats and acting like high schoolers applies to the weekend waarriors, who  see the kids on weekends , pay their child support and skip off to their new lives. Women do that too, but for you, the kids are in your hands which seems a much better choice .
I hope you only the best, it isnt an easy road,

Wow, that *is* deeply personal and sharing may help unburden you in some way. I know your time is so very, very limited, but read as much as you can and know you’re not the only one. Life suddenly changes for many in previously undreamt of ways (I was suddenly widowed at 32 but then met the new llove of my life a year later and we had a wonderful child). That year was hell in between though and I had no kids. So I can it imagine how difficult this must be.
You unfortunately have to interact with the cause of your pain (and the children’s pain and trauma) and that’s just rough. Time. Time helps so much in so many ways. You’ll develop knew coping strategies and eventually it will hurt less. Hoping that time heals your family’s wounds quickly.

Thank you. I’m just trying to give insight into myself and this new journey. 🙂

Thank you for sharing this. I think it’s logical to view this as a death in a way – much of the grieving is the same. Sending support your way!