One of the downsides to Akron Children’s Hospital taking over where Emmett’s physical therapy is being done, is that they have banned parents from taking videos of their kids in action.

They have signs up everywhere that say no videotaping allowed.

From now on, you’ll have to just trust me when I say that Emmett kicked major butt at therapy today.

Can he do everything he needs to be able to do? Absolutely not.. That being said, he gives 110% each and every time.

He did really well today. He had to do a few things he’s never done before and he struggled at first. I sorta pulled him aside and told him to pay attention to the pattern because he functions largely on patterns..

That did it for him and he just kicked butt. I’m really proud of him.. 😀👍 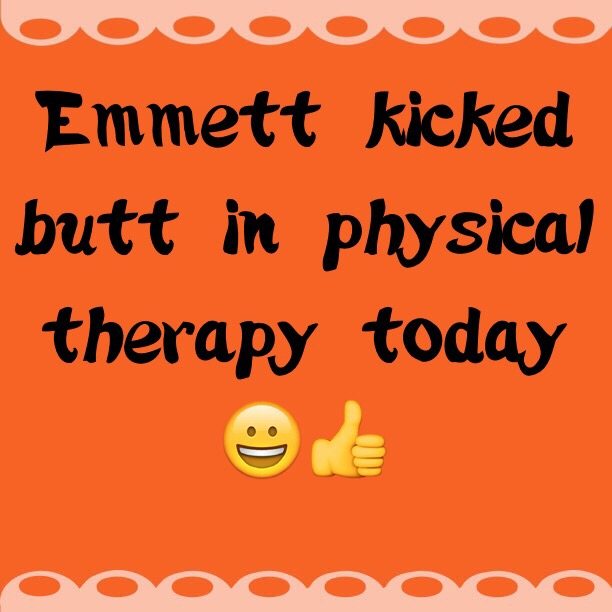 I really think it’s a privacy thing because it would be really tough to take video of your child without other patients, therapists or parents being captured as well.
That’s just my opinion though. You may be right.

It’s probably more of a liability issue than a privacy issue, and they can absolutely tell you that you can’t take pictures of your own while he is in THEIR facility.

Why no videotaping? Can pictures be taken?

Because he’s got extremely low muscle tone. This puts him at risk of jury. PT helps him strengthen.

Why is he in physical therapy?

Good idea about the patterns